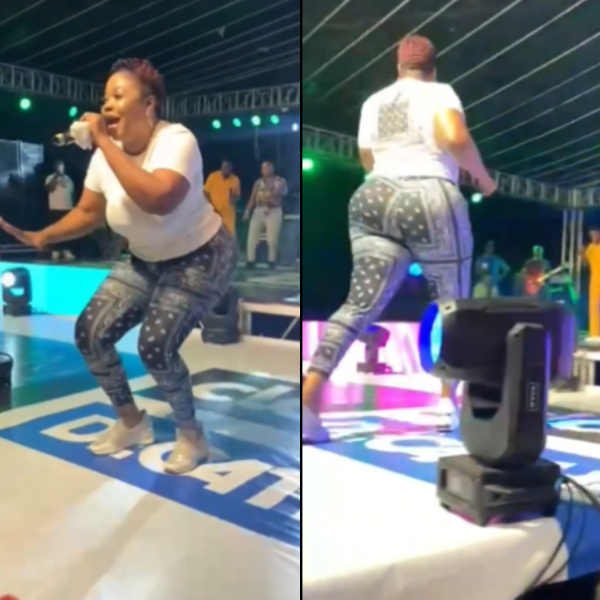 It has come into the news once again as the referred to gospel sensation, Gifty Adorye, known in the showbiz circles as Empress Gifty as she shocked and bamboozled the residents of Ashaiman when she was billed to perform on a slated event called “Ashaiman To The World Concert” at a park named Saka Saka in the Ashaiman District during which she adorned herself in an attire described and considered as worldly which painted pictures and portrayed certain revealing outlooks of her body glaringly and obviously to the audiences who were present on the day of the said concert.

She has been reported to have worn a dress that revealed very sensitive parts of her body publicly when she mounted the stage on which she was expected happily and joyfully hoped to electrify her fans and followers with religious and spiritual awakening exercises with the Holy Spirit filled songs she has been singing across Ghana but the manner in which she dressed before appearing on stage, created doubts in the minds of many if she still holds on fast to her Ultimate Maker living above.

The same Empress Gifty, came into the limelight just at the late part of the just ended week for posting wild and sensuous photos of her body onto the internet after which she daringly warned social media commentators to be cautious of speaking about her new shape and body parts when she brazingly uploaded such seductive pictures online.

Even though there were cheers and mammoth acclamations of her presence the moment she was attempting and preparing to mount onto the park of Saka Saka in the Ashaiman community in an acknowledgement of her physical presence on the ground just because, those present on the ground were highly elated and charged to see her on the day of the concert performance meant to market and exhibit some hidden talents of certain notable individuals in the community, her outfit caught up with the sense and sensibility of some people as they completely lost touch with reality on the ground.

The manner in which she decorated herself with the dress of worldly people who always cause instability and controversy coupled with dramatic lifestyle conducts, shockingly jettisoned the thoughts others were having on her as being a role model to others due to her religious and spiritual background but suddenly, her style of dreaming to the event ground, defied and nullified such an outstanding assumption they had about her persona previously.