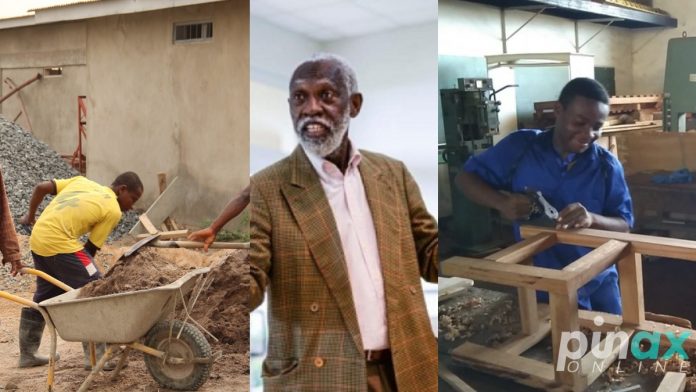 Ghanaian graduates who are currently waiting for the government to provide them with white-collar job offers have been urged by the former rector of the Ghana Institute of Management and Public Administration, Professor Stephen Adei, that there should venture into other lucrative but menial jobs that would help them stop depending on their families and government for survival because, they having the requisite educational qualifications, does not guarantee their safety in the job market even though they may be well educated but their level of education is only limited to intellectual capacity development and that is why many people are completing their various course studies but after graduation, they return home with no actual and formidable skill that could maintain and sustain them in the employment field because things are revolving.

According to him, any graduate, who solely depends on government for jobs to be provided, such an individual is a short termist and that very person will end up being on the street and becoming useless and unproductive to himself, family and the nation at large because, that person only goes out to school for intellectual capacity development just to be relevant in a society but here in Ghana, the relevant of his or her education, is needless and purposely because, of their aim for white collar jobs after finishing their field of studies, they ignorantly fail to endeavour other avenues that are available for them to explore and see what prospects are their for them to uncover but they will blatantly and senselessly hope that, when they graduate, the government will do everything for them to be in the comfort zone of their laxity and say yes, they are graduates and for that matter, this or that must be done according to their dictates but in the views of the professor, it does not work out in that way though it seems so when you are outside but the moment you step in the gap, you will realise that things look differently when you are outside the equation where as coming in too, it is a different ball game together.

He, therefore, educated every graduate waiting upon the government for job provisions, to think outside the box and explore by chasing out into their fields of traditional jobs that are menial but quite lucrative, to go in which will be better than seating down aloof folding your arms were expecting the government of Ghana to conjure manna from heaven suddenly for their bellies to be satisfied and in that aspect, it is not going to happen today or tomorrow because the government itself is not yet satisfied how much more of those who are not even known to the current crop of people we have managing the affairs of the nation.

He dispelled claims that, nowadays, everything he comes out and says, goes and defies logic and by an extension, puts the value of education down and downgrading its potency but he quickly refutes such unsubstantiated assumptions against his regular remarks concerning our educational system these days but the fact of the matter is that, he was not verily noted for such comments when he was presiding over the reigns of GIMPA.

He, therefore, advised everyone in need of jobs, to go into carpentry when the need arises or other traditional activities one could engage him or herself in to make ends meet which would, in turn, be better than folding their arms whilst waiting for the government to provide them with jobs where fishing and farming activities are left out there for the aged to undertake.