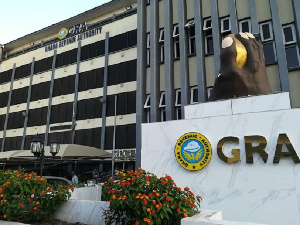 There are failing to account comprehensively for the taxes being collected from Ghanaians and other business owners but they are quick to claim they have the laxity and authority to prosecute and cause the arrest of persons trying to avoid paying their obligated duties.

That is the story of the Ghana Revenue Authority officials who could not account for over several millions of Ghana cedis when they were summoned by the Auditor General to render proper and credible standing accounts of how they were able to collate huge colossal amounts of money from tax payers in the country but there was nothing tangible to prove. But the same Ghana Revenue Authority officials have handed over three prominent facility managers to the Ghana Police Service Criminal Investigations Department to prosecute such individual managers for non compliance with the tax laws of Ghana.

According to the Ghana Revenue Authority officials who would not be held accountable for monies collected from Ghanaian tax payers, are quick to chase those they claim are bent on evading their mandated tax obligations to the state of Ghana.

The criminal investigations department of the Ghana Police Service, is currently investigating exactly, what might have prevented such individuals named in the tax evasion claims from honouring their tax duties to the country.

It is always the habit of the officials coming from the offices of the Ghana Revenue Authority to chase people allegedly for not paying their collective duties to the country through the collections from the officials of the Ghana Revenue Authority even though the accounts being collated are not rendered well by the same individuals which is restricting others from respecting the laws mandating for the payment of taxes in the country because, they are not reliable and trustworthy.

When their seniors were held by the Auditor General to give accounts of monies collected from tax payers, they could not be bold in stating how exactly such huge resources were misappropriated but the same people are quick to accuse and label people for not paying their mandated tax obligations as expected of them.

Such individuals are the kind of people who are dealing with in the country even if they have arrested and charged them for evading their tax obligations, who is still going to pay on their behalf?

It is high time we did the right appropriate thing in this fast deteriorating country and stopped blaming people who are transforming the lives of the vulnerable individuals since you people have collectively ruined the finances of the country.