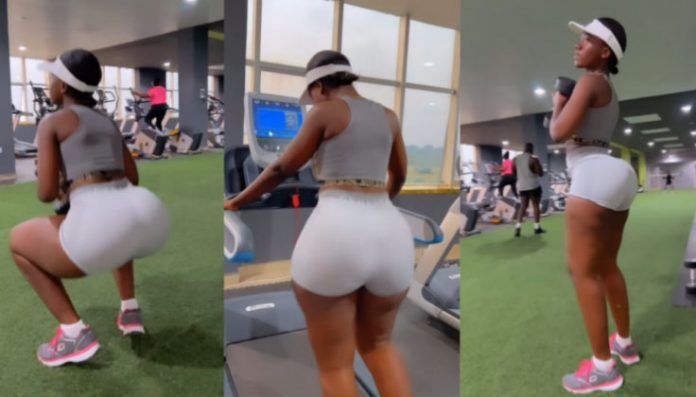 Ghanaian internet celebrity, Hajia Bintu has caused massive stirs in the gym on arrival and during her workout.

The beautiful lady who was determined to build some shapes was seriously devoted to the agenda. Hajia Bintu is such an individual lady who is mostly celebrated her fans online due to the manner in which she does her things to thrill her followers with new styles in how she goes about her stuffs.

Ghanaians are fun loving people because anytime Hajia Bintu come online, she just comes to entertain her viewers and fans filler and ginger other people to keep talking about her which leave people thinking and asking if she plans everything carefully behind the scenes behind the door before she comes online with her funny behavior which mostly catch the attention of people both her fans and those who are not her followers but amazingly, she wins their hearts into her activities.

As she has been spotted at the gym working out many people are saying she is carefully bent on doing that just to receive a boost in her appearance because she improve upon her shape.