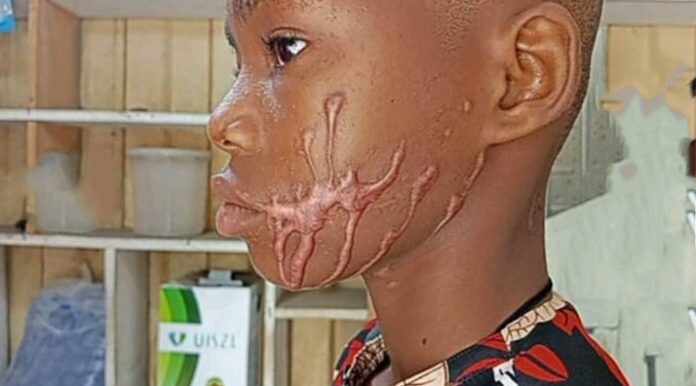 A certain wicked carpenter with the identify as Kofi Narh, has been arrested and put before the Koforidua circuit court for attacking a fourteen years old Nigerian national with an acid in the Eastern Region of Koforidua.

It has been gathered that on the day of the sorrowful incident, the victim while fellowshipping on Sunday at the Watchman Charismatic Renewal Church, suddenly suffered some stomach upset and quickly dashed out of the church building to ease himself on a public toilet facility constructed in the area but his situation unexpectedly got worsened in the process. He therefore, entered the illegally erected structure of the carpenter near the Diplomat and Embassy hotel.

The said carpenter who was available at the shop during that special juncture undertaking his trade activities, allegedly splashed and smeared a certain harmful and corrosive substances on the body parts of the young boy suspected to be an acid when the victim tried to release metabolic substances at a nearby place next to his carpentry shop.

The alleged culprit then chased out the victim to the church premises while still continuously sprinkling the corrosive chemical on the boy covering and soaking his whole body with an acid which kills instantly as the boy was screaming and moaning for help. The suspect was then arrested by the church members and later handed over to the police officers to continue with other matters pertaining to the substantive case.

The victim who suffered varying degrees of grave injuries on his entire body was then rushed to the Eastern Regional hospital for urgent medical care.

According to informations obtained from some eyewitnesses in the community where the tragic event unfolded, the victim was running for help because he never knew it was an acid being poured out on him because he was just shouting 🔥 🔥 🔥 🔥 🔥 towards the direction of the church as the alleged suspect still pursued him with wrath and vexation.

After which the suspect was arrested collaboratively arrested and detained due to the callous manner in which he violated and abused the innocent boy of Nigeria descent who lives in the community with his father and other two siblings after the death of his mother in 2017 which she was since buried.

The young boy was then taken to the hospital after which the medical authorities in the facility treated and discharged him upon careful studies of his harrowing conditions. But according to informations communicated to the family members, the doctors said even though he has been treated at the moment, that could not be the final and ultimate treatment of his condition due to its severity and serious nature but instead the boy needs to undergo plastic surgery to correct the severe scars and harmful scenes on his body.

When the information got to the father, Timothy Nwaneli, who is a labourer, burst into tears and sadness and said he could not afford to pay the cost of the medical bills of the boy whose name has been with held for security reasons and he has therefore, appealed for financial supports from kind and benevolent organisations and individuals so as to see his beloved son of fourteen years undergo a successful plastic surgery for him at the Eastern Regional Hospital or anywhere else that the doctors may refer them to afterwards.