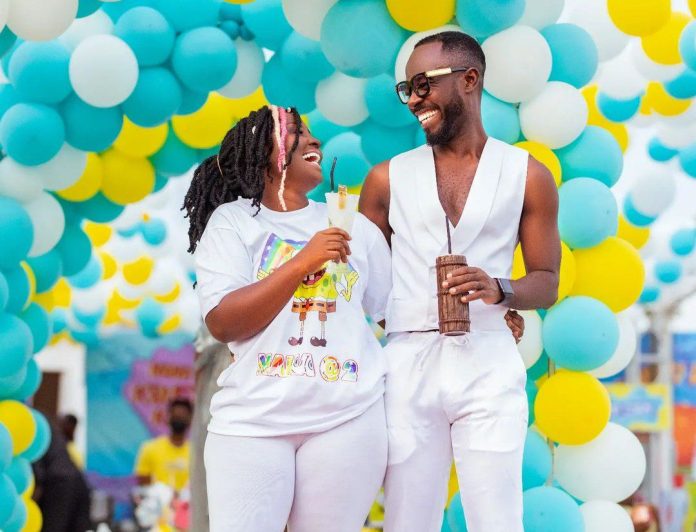 It has been revealed by one of Ghana’s music sensations that the very woman that he tied the knot with, he was the only man who penetrated her first after her birth many years ago due to her high level of religiosity and moral decency.

According to Okyeame Kwame, he so finds pleasure in his dear and lovely wife so much that, he does not even know what exactly is on this earth which he is going to liken her because she is just too much to be described.

He revealed that the woman of his ultimate happiness, preserved and maintained her body due to her religious and devoted moral upbringing that, her body, is the precious time of God and thus; needs to be protected and kept beautifully as a living sacrifice of God for consumption. Okyeame Kwame joyfully rained showers of blessings upon the head of his found lost rib to the extent that, ladies who could not preserve their bodies as a living sacrifice to God due to their irreligious nature, could not hold themselves together as they wept bitterly until their eyes were blindfolded with tears because they regretted losing the decadence of their pride which is their virginity at an early stage of their lives as a result of the worldly desires and lusts of this contemporary world without thinking of the ramifications it could cause to them in the near foreseeable future with shame and embarrassment.

In a post of the song maestro on 18th January 2016, he gladly stated on social media that, his ardent lover was a total virgin before they got married and he was the only man to have removed her panties on that very grateful and fateful day because it was a night of joy, happiness, cheers, smiles but filled with tears of; plains, moaning, groaning and excruciating lamentations because it was that very day he was on the bed with her for the first time trying fervently to penetrating her with assiduous determination but at the end of it all, they gladly ascribed all the praises and glory to the Highest God for reserving such an amazing and an adorable lady for his liking and they are spending their priceless lives and souls together happily without any shred of ambiguity from the side of each other either on the ground of infidelity, grudge or envy as to what someone has or the other does not have because they are compatible and loyal to each other.