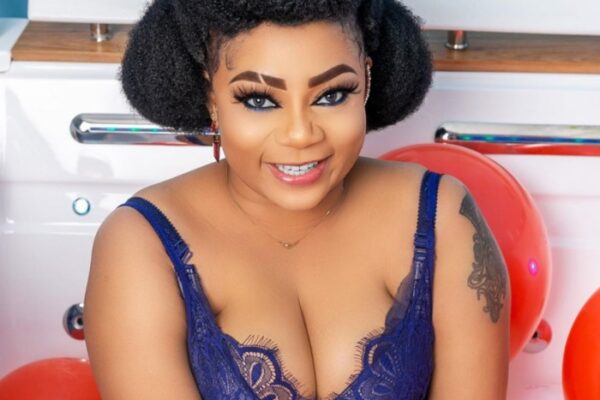 As some people holding the view that every form of sexual activities engaged in by individual members must be protected from disclosure under applicable knowledge of the general public, it has become like water that others are drinking to quench their thirst in the country.

An entertainment sensation, Vicky Zugah, has confessed to having deep sexual bouts skin to skin rather than wearing that thing called a condom.

According to her, he feels like a real woman when she engages herself in a raw sexual encounter where the flesh parts of those parties click as if you are on a high way journey at dawn hours.

She stated that those who do not know anything about Sex are the ones who indulge in using protection but as far as she is concerned about her sexual reproductive system, she is already addicted and fancied with the raw state in which she plays out with the other opposite gender when they are having sex non stop.

She further declared that having sex in a raw state where her natural flesh contacts and connects to the other person’s flesh, she feels as though it were an electrical circuit that passes through her bone marrows.

She there educated her numerous followers to hit up the thing raw and thank her later because it is the best way to feel the natural taste of the gift bestowed upon them by the one who brought them onto this earth and so they should not feel shy or nervous in their attempt to enjoying the flesh raw like that because that is the only natural antidote to solving and resolving every form of dissatisfaction in any part of your body to appreciate the involvement of the other sex partner.

She even said there are other certain gymnastics that one can display if she engages herself in raw sex with the other opposite sex where you have the choice of feeling maximum satisfaction and pleasurable which will cause your nervous system to be eased off every stress on any part of your body.

But it appears as though it bothers on how some parents do culture their children because it is stunning how a grown up woman could state in a public how she does sex and things that she feels before; during and after she engaging herself in the activity where her level of lustful mood is focused and centred on the maximum premium benefits she thinks she derives from such thought to be secret adventures but here having sex in your private; you then come up with it to educate your followers not even on basis of privacy but in the full glare of the public.

It could also be concluded that such individuals have lost their moral dignity and conscience therefore, that is the only thing they could engage themselves in for the purposes of funfair to attract the other suspecting victims into their illicit and draconian scenes.