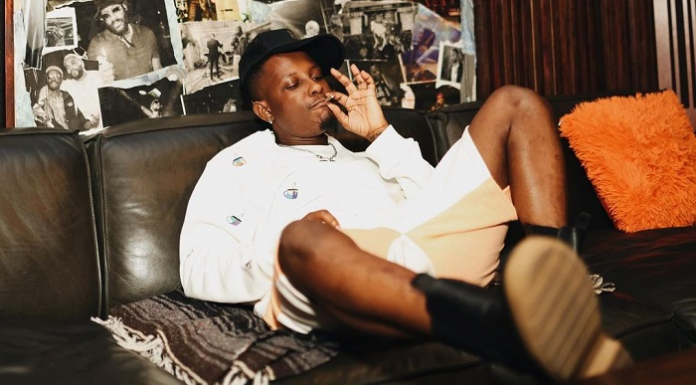 ‘Down flat’ hit maker, Kelvynboy made a startling revelation when he disclosed his deep-rooted appetite for smoking. His disclosure in our conventional African setting is causing massive uproars online over his confident confession.

According to him, he does not lie or apologize for his fixation on what he has been doing in secrecy but rather, he must tell the whole truth about what he does to the general public.

“It’s my life. It’s a lifestyle, it’s my career. This is the only thing I know how to do, so it forms a part of my lifestyle. The way I live my life is no one’s business, but we come here to discuss it. I can’t hide it. So for real, I smoke,” he said.

Talking about how he feels after reading feedback or comments on social media stemming from his utterances on air, he said; “I won’t see any feedback. I don’t read comments. I don’t care.”

“People think that you will go mad when you smoke. But for me, I will go mad if I don’t smoke. Smoking is my addiction. I like to smoke. That’s what calms me down. I have learned a lot from Bob Marley. He used to have it in his hands all the time,” Kelvyn Boy continued to elaborate on why he smokes daily,” he concluded

He further stressed that he considers his insatiable appetite for smoking on daily basis to be a lifestyle that has come to be part and parcel of his life.

One wonders what actually will motivate such an individual who is pulling a lot of people into his field of a music career to be engaging in such activities which is dangerous and harmful to his health.

Some people think that, before they appear on stage to sing, they must charge themselves on a large scale before they show up so that they can perform better than they could do if they do not smoke such risky substances.

Even though his public fixation does not surprise many people, it is believed that as he has confessed to doing what others are refusing to admit, he is going to be forgiven by the giver of his dear life.