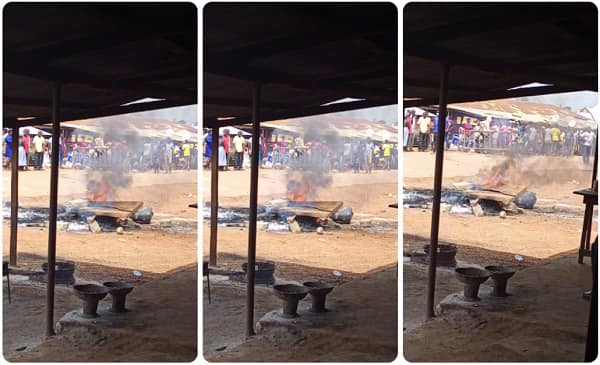 Some youth in the Juaboso, in the Western North region, have lynched and burnt a crime suspect they believe to be a member of the terrorist syndicate which has been on the neck of the residents living in the area through harassment and threatening of their lives.

According to those who undertook such a dastardly act, the activities of the group members have taken over the peace and security of the people putting up in the community and by doing the patriotic duty that is expected of every responsible citizen in any civilized country, they took it upon themselves and reported their nefarious conducts to the police administration in the area to try and fish out those rascals and rowdy individuals but to no avail.

The residents stressed that, due to the severity of the illegal behaviors of the members in the group that had been causing fear and panic amongst neighbors in the society, they have no option but to be on the lookout for those suspicious elements who have been putting the tranquility of the peace-loving people in the vicinity at risk.

The residents sacrificed their dear lives and put it on their chests that, enough is enough for those jeopardizing their peace and tranquility in the community therefore, they will make sure they do all that they could to bring to book those involved in disturbing the peace and security of the people residing in Juaboso.

It is on that very basis that, when the illicit activities embarked upon again by the members of the group, molesting and threatening the people through various ways and means, the community members came together with a united force and arrested one of the alleged crime suspect implicated in the matter but something untoward happened to the suspect they had detained without any support from the police officers in the district who only looked on unconcerned as the residents continued to be having nightmares regarding the dangerous activities the members of the syndicate have launching on the community for several months upon cases of reportage to the police administration but they were not willing to cooperate with the residents in bringing lasting solutions to the insecurity and unrest instigated by the behaviors of the members in the syndicate.

Due to the bravery of the members of the community, they were about to muster courage and chased out the syndicates whose activities have been causing sleeplessness for the people living in the district, and luckily, they caught one red-handed and decided to deal decisively with him once and for all.

The police officers in the district were alerted duly about the arrest and detention of one of the alleged gangsters involved in the activities of those who have been terrorizing and threatening the citizens in that part of the country, Ghana.

But to the shock of the police officers, they thought the suspect would be brought to the police station for further investigations to be conducted into their perceived activities disturbing the peace and security of the people when they saw the community members leading the crime suspect heading to the direction of the police station.

The police administration in the district, was just patiently waiting for the arrival of the prime suspect and the citizens who arrested him but the moment they were very close to the police charge office, they unanimously, set ablaze the suspect with fire by pouring chemicals and by an extension, lighting them up with fire while the police officers watched on helplessly hoping the suspect would be brought to their counter for an interrogation.

The body of the prime suspect had been completely burnt into ashes in the full glare of the police administration in the Juaboso district of the Western North Region of the Republic of Ghana.