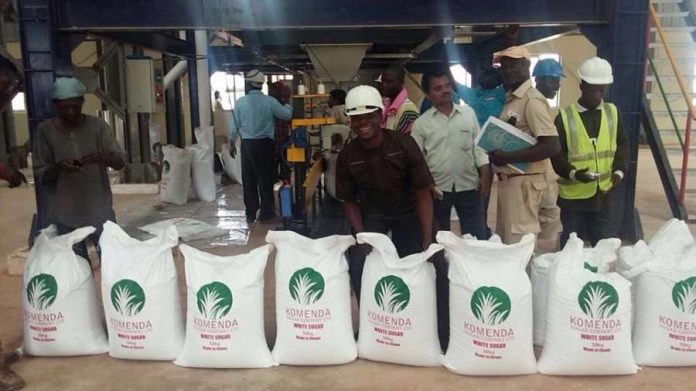 The sugar factory in the Central region of Ghana which was totally exhausted and grinded to a shut down due to operational challenges, has resumed its full productions after management decided to restore the lost glory of the country which has become a no go area for a while now without producing anything else from the region but just lying down idle.

The Municipal Chief Executive in the area, has lauded the resumption of the company which he strongly upholds and believes that would create jobs for the teeming youth in the community after waiting patiently for many years or months after the commercial factory was left down unattended to after which some pessimistic individuals thought that would be the closure of its all with the reason that they are not willing to see the progress of the factory.

According to the Municipal Chief Executive, it is clear indication that things are going to pick up in the region because of the commitment of the New Patriotic Party government to making sure that the people of the Central region are left out of the hook of the abject poverty chains which has been swimming on the face of the masses in the region due to numerous employments hitches after which some have given up on their difficulties in searching.

The sugar factory was recently blamed on such a bad precedent been set up by the management where they planned of importing raw sugar cane from neighbouring countries for processing while the farms of Ghanaian farmers are left to rot completely on the ground as many people jumped into the throats of management bodies for setting up a very bitter foundation against the Ghanaian local sugar cane farmers from whom it is clear enough and possible that the same raw sugar cane that they wanted to import from the outside countries, the same and even better samples are in the country but due to some hidden motives behind their actions, they decided to go ahead with it but trying to justify their clandestine pilfering activities that, the raw sugar cane materials they were looking for were not enough and adequate for the processing of sugar cane in the factory.

The sugar cane factory constructed in that part of the Central region of Ghana, received varied political chastisement and vilification regarding suspicious characters of those who were put at the helm of affairs to man the issues surrounding the activities of the company to seeing that, they undertake such a good and thorough job so that at the end of it all, whatever the case may be, no blame would be laid down at their doorsteps which may in turn, jeopardise and denigrate the images of the individual members in charge of the facility constructed by the money of the tax payers in Ghana.

A lot of people living in Ghana are complaining bitterly about economic infractions caused by profligate spending and financial malfeasance incurred by the government and its political appointees while failing to provide jobs for the masses in the country to also find themselves amongst the worthy because they have something significant doing with their lives but nothing of that sort is not happening because such individuals do not want others to become like them so that they will always be dependent on them where they could be exploited and used like slaves without any fundamental human rights accorded them with by our 1992 constitution.