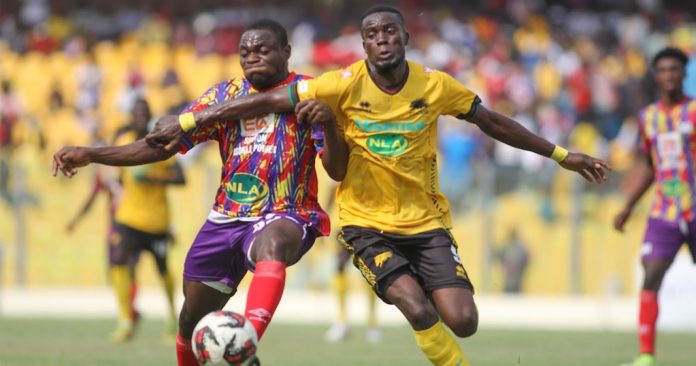 The Asante Kotoko Football Club is highly expected to have an awesome football encounter with its main opposition team, the Accra Hearts Of Oak in their first superclass challenge which dozens of their supporters are yearning to storm the football pitch in massive monumental numbers.

The two teams have been at loggerheads with each other over which football club in the premier league is the best when it comes to local football activities and practices in Ghana.

Kotoko and Accra Hearts Of Oak are always engaging in a turf war before over a hundred of their supporters misconducted themselves tragically, the stadium in which they clashed collapsed on them causing a national disaster after which their football authorities were blamed seriously for not ensuring adequate security and proper maintenance before and during the game because they overstated the number of people who must be allowed into the stadium in which they were engaged in at the time during the football encounter. The weekend is going to be busy for many people as their favorite football teams are going to battle to see who emerges triumphant when they fiercely compete for the first superclass cup which has been the dream of many of their players themselves, supporters, and their various management bodies.

Sulley Ali Muntari has been touted as a key figure who will stand out in the game even though it had been reported him that he is on the verge of switching to Asante Kotoko Football Club because he refuted another contract extension accord with the management of the Accra Hearts Of Oak when he was pleaded with to sign another agreement with the club in which he blatantly rejected the offer to head to Kotoko football team to catch the attention of Ghana Football Association executive members to see if possible he will receive a call up into the national team of Ghana, The Ghana Black Stars.

Sulley Ali Muntari revealed willingly in a recent interview conducted with him by the president of the Sports Writers Association, Master Kwabena Yeboah of GTV Sports fame where he put it to Muntari a few questions about his views concerning the current setup and his dream about the club and then, the voices were heard from the horse’s mouth to the fact that he is hopeful of further opportunities knocking on his door again that such chances will come into his life once again as it used to be in those days that he was instrumental in the activities relating to the duties of the national football team of Ghana, Ghana Black Stars.