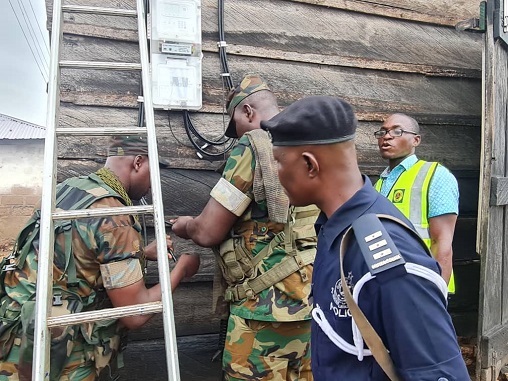 The unavailability of light in the Yilo Krobo constituency of the Eastern Region of Ghana, has reached a state of emergency where for over months, the electricity as the main source of energy being used by the residents was cut off due to some sort of disagreement between the workers and the constituents over some few fracas which is yet to be settled down amicable for a lasting peace and tranquility to prevail in the entire community.

It was announced last week by the employees of the Electricity Company of Ghana in the Yilo Krobo constituency that they will bring back their power if they wholeheartedly adhere to the agreement that they will not embark upon beating up and severely attacking the officers working in the name of company in the region.

This very week, their representative in the Parliament of Ghana, indicated and registered his displeasure about the continuous power cut in his jurisdiction which according to him has been making life unbearable and harsh for his subordinates due to the countless complaints he is receiving on daily basis bothering on instances of the people living in the area losing their jobs and loss of finances due to the absence of power in the entire constituency.

Hon. Albert Tettey Nyakotey, the member of Parliament for the Yilo Krobo constituency, earlier took it upon himself and appealed to the officials at the constituency working as representatives of the Electricity Company of Ghana to restore power to his constituents before if there is anything else to talk about concerning the security and peace of mind for the workers then it would be the second thought of actions to be considered in their later deliberations when they engage one another in a dialogue but in a sharp rebuttal, the managing director of the Electricity Company of Ghana thinks other words.

Mr. Samuel DM Mahama, the managing director of the Electricity Company of Ghana, who was recently appointed by the president of Ghana Nana Addo Dankwa Akufo Addo, finally, has told the constituents that he could only order for the restoration of their electricity if they agree with the prepaid metering devices to be installed in their various residences to avoid further cheating and unfaithfulness in the power purchasing system in the constituency.

According to Samuel Mahama, for fairness and transparency to be the order of the day, the community members living that particular part of the country, must come to terms that their days of using and been placed under the post paid metering devices, were over long ago since we are all living in a new era of this contemporary world.

Last week, some disgruntled and livid individuals coming from the part of the Yilo Krobo municipality who were aggrieved about the decision of the power officers in the area not to return their power supply until further notice, went on rampage and attacked the workers in some instances where they later in their anger, cut down some main electricity poles in the community as their way of retaliation which in turn, served no reasonable thought but rather cantankerous and malicious intents with severity of shrewish conducts.