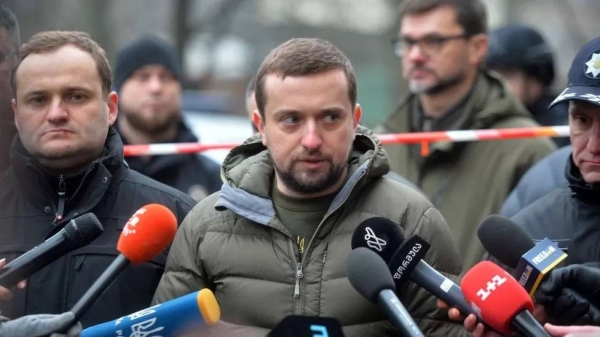 One of President Volodymyr Zelensky’s key advisers has resigned ahead of an expected government reshuffle.

As the deputy head of the presidency, Kyrylo Tymoshenko expressed gratitude to Mr. Zelensky for “the opportunity to do good deeds every day and every minute.”

Even though he denies wrongdoing, he had been linked to scandals involving his use of expensive automobiles.

Mr. Zelensky has indicated that additional high-ranking government employees will leave his administration in the coming days.

The leader of Ukraine has stated that he is making several personnel changes in the government, regional authorities, and security services.

The departure of Mr. Tymoshenko, who previously worked on Mr. Zelensky’s election campaign and oversaw regional policy, may be part of the president’s shakeup, according to local media.

However, the restructuring takes place as a result of a crackdown on corruption in Ukraine, which is one of the most important requirements imposed by the EU on the nation for it to move forward with its application to join the group. Except for authorized business trips, all state officials are prohibited from leaving Ukraine.

Vasyl Lozinskyi, the deputy infrastructure minister of Ukraine, was fired on Monday and taken into police custody after being accused of accepting a bribe for $400,000 (£320,000). He has refuted the allegations.

Transparency International ranked Ukraine 122 out of 180 countries in its list of corrupt states in 2021, citing the country’s history of corruption.

“No return to what used to be in the past, to the way various people close to state institutions” was the promise made by Mr. Zelensky in an address on Sunday.

Additionally, David Arakhamia, the leader of Mr. Zelensky’s Servant of the People party, has stated that dishonest officials could be imprisoned.

“Officials at all levels have been constantly warned through official and unofficial channels: focus on the war, help the victims, reduce bureaucracy and stop doing dubious business. Many of them have actually listened, but some, unfortunately, did not,” he said in a telegram statement.

“If it doesn’t work in a civilized way, it will be done according to the laws of wartime. This applies both to recent purchases of generators and to fresh scandals in the ministry of defence.”

Following media reports suggesting that his ministry signed a contract to procure food for the military at inflated prices, Defense Minister Oleksii Reznikov has also recently come under fire. Those prices, according to Mr. Reznikov, were a “technical error.”

Due to their connections to the resigned presidential aide, the heads of four regional administrations—Sumy, Dnipro, Zaporizhzhia, and Kherson—may be the next target, according to a report published in the Ukrainian newspaper Ukrainska Pravda.