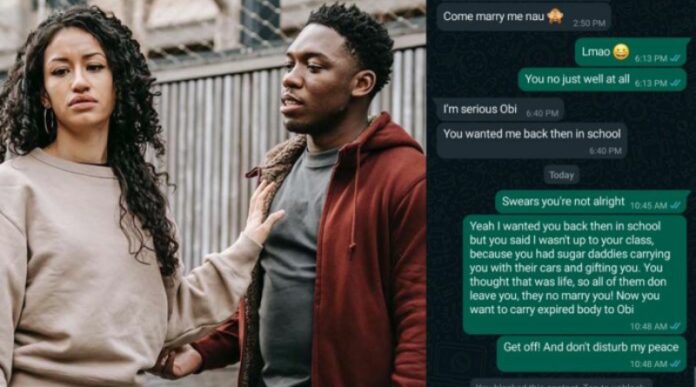 A male classmate’s proposal was rejected by the guy.

He was rejected by a female classmate when they were in high school. Well, after hustling hard to the top, the lady has found him attractive enough to consider as a boyfriend.

The woman, known only as Sharon, sent a message to the man, Obi, in the discussion that Twitter influencer @jon d doe posted public in an effort to get in touch with him.

She explained that she obtained his phone information from their class’s group chat when Obi inquired how he managed to receive a message from her.

She was direct and pointed, listing some of the accomplishments of the young guy who had moved to another country.

She emphasised that Obi has made a home for both his mother and himself while living overseas.
Sharon, who was undoubtedly impressed by his achievements, proposed to him while he was still single.

Obi chuckled at her remark and playfully remarked, “She’s not okay.” But Sharon wouldn’t go away and reaffirmed that he had asked her out in high school.

Obi retaliated by berating her for having the audacity to get in touch with him now that he is prosperous after she disregarded him in the past while dating older, wealthy men.

Obi advised her to keep away from him and blocked her on WhatsApp after giving her a piece of his mind.

Read the full chat below: 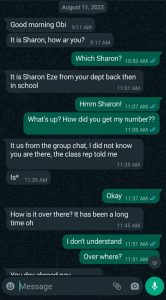 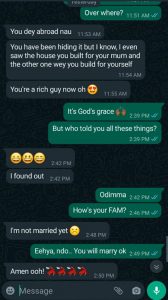 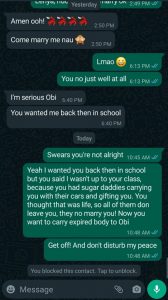