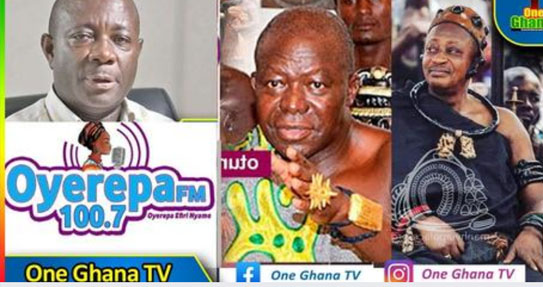 The closure of Oyerepa FM radio station in the Ashanti region, has taken another twist and turn of events as Odike who was brutalised over the weekend by some suspected riffraff thugs in the region,

has stated that the chiefs at the manhyia palace are only bent on intimidating the youth in the region from realising their dreams in region after it was said that he uttered damning and degrading remarks concerning how the leaders of the Manhyia palace.

Are handling the issues surrounding the development of the country and the region as a whole during which the leaders ordered the closing down of the radio station in the area where the reports had it that the manhyia palace gave an order that they should close down the radio station and truly it was shut down completely until further notice.

According to the views of Media for West Africa, there is no law in Ghana which mandates any traditional authority to shut down or close down any radio station in any part of the country Ghana. The rumour that is rife in the media scenes after it emerged that the radio station officers of Oyerepa FM transmission had been locked up upon the orders of the Asantehene Otumfuo Osei Tutu and it is as a result of that,

Odike who even claimed that the personal body guard of the Asantehene Otumfuo Osei Tutu himself was among the thugs who attempted to kill him because he knows that particular security who goes out with the king of the Ashanti kingdom and he still stands by his assertion.