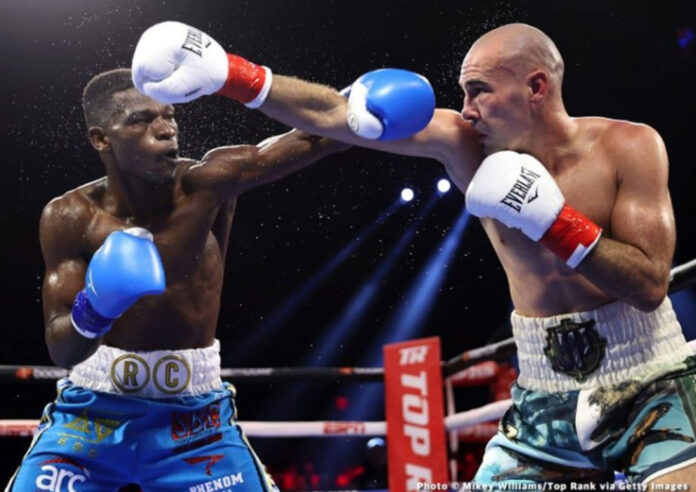 The Ghana boxing maestro who has been disowned by the Ghana Boxing Authority, GBA, for not fulfilling his obligations of paying his statutory dues regularly,

has proven to the leaders of the Ghana Boxing Authority that, without their ultimate approval of his next pending boxing debut against Puerto Rican Jose Pedraza in his junior welterweight debut that he has received mammoth acclamation from Ghanaian journalists and boxing enthusiasts after they declared that they have banned him from fighting under the banner of the Ghana National Flag. He has therefore gone ahead and fought fiercely against his challenger in the junior welterweight debut in the early hours of Sunday.

In a unanimous agreed declaration, the boxing judges gave their various points of decisions and verdict where empowering Richard Commey earning a split draw decision against Puerto Rican Jose Pedraza when they contested for their junior welterweight debut against each other in Tulsa.

From the verdicts of the judges, it is clear that Richard Commey has not been defeated though the Ghana Boxing Authority officials indicated their defiant door against the boxing icon for not honouring his tax and other valuable duties that are expected of him and because of that, they have disclosed that Richard Commey would not receive the blessings of the boxing managers in the country and the citizens as well but when the information got to the house of Richard Commey, he responded ironically and humorously by immediately hoisting the national flag of Ghana by cladding in all the colours symbolising the backing of the country and the citizens as a whole as an indicative factor of receiving unflinching endorsement from Ghanaian people which even inspired him not to receive shame and reproach.

The decision as communicated to the media coming from the Ghana Boxing Authority as to why the boxer has been suspended, scores of Ghanaian sports journalists could not take lightly to what has been reported by the authority describing their static and repugnant attitudes against the boxing maestro as highly condemnable and offensive.

It is a good news to many in Ghana that though the boxer has been declared persona non grata, he fought to the best of his ability by going ahead to fight under the banner of the Ghana National Flag despite the numerous threats issued out by his boxing regulators in the country where he defended the country with loyalty and patriotism without bringing any embarrassment and if not, it could be said that it is because he has been reprimanded hence his interest and zeal for the cause got quenched in the process.