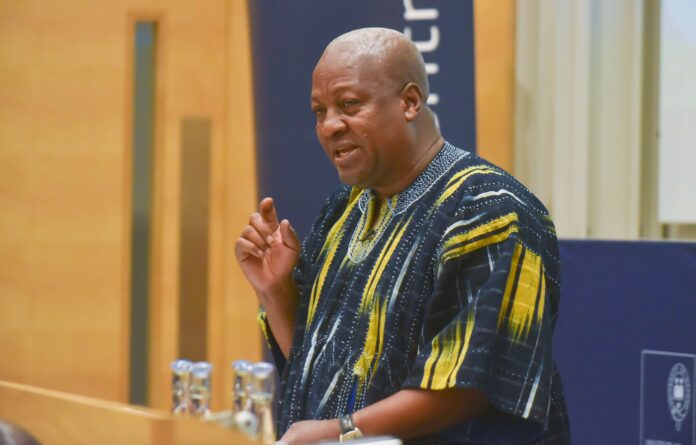 Former president Mahama, says he is not going to sleep for an inch unless Ghanaian citizens begin to enjoy the economic fortunes that they are expected to benefit from in the country after Nana Addo Dankwa Akufo Addo took over affairs from him when his tenure elapsed about seven years ago without professing further and better explanations and stringent actions in solving the critical financial challenges that the people of Ghana are currently going through.

According to the former president John Dramani Mahama, if he were to still in power, Ghana would have been a haven but because he allowed the current president to assume office though he does not still believe in the legitimacy of his political governance and authority, due to the fishy deals and unrealistic decisions taken by the Electoral Commission of Ghana.

He is just giving him the benefit of the doubt to do something reasonable else, posterity shall surely judge him one day because the economy of Ghana was in a stable and formidable economic growth and path before he claimed to have won political power and when he was allowed to rule the country, he has mismanaged and embezzled the resources that are meant for the development of Ghana they are being shared amongst they who are affiliated to one another due to their clandestine pilfering activities which they are embarked upon day in day out and one of such highly condemnable and punishable one, is that of the one involved in by the woman who is a council of state member in the person of Eunice Jacqueline Buah, who should know better than she is a mother to the country and not a murderer to the country but because of her parochial interest placed above that of the country, her anus has been largely affected into the views of the general public.

Many people are complaining bitterly about how things are not picking up financially well in the country due to how they are struggling so hard before they could make a little bit of money after the hard work of the day but those who are entrusted with the hands of with the resources of the nation, are sharing the booty amongst themselves left right back and center without any punishment because they are a bird of a feather and thus they do their activities under the code of secrecy because they do not want any other person to be aware of their heinous conducts that they always exhibit in secret meetings that they have been having to take the next line of actions they are intended to embark upon in the country which is not helping and promoting the image of the nation but rather, jeopardizing and endangering the future and progress of the country as a whole.

So, as the former president, John Dramani Mahama has indicated to Ghanaians, the current president lacks common sense application in solving and remedying the ramifications caused by profligate spending and financial malfeasance incurred on the country through the reckless manner in which the funds of the country are utilized and disbursed either through the appropriate usages or inappropriate means.

The debate that is ongoing between the former president John Dramani Mahama and his current counterpart, Nana Addo Dankwa Akufo Addo, is not the priority of the Ghanaian people and what they desire is just to have a three square meal a day and it is going to be afflicted with hunger and malnutrition being meted out to their children who are waiting patiently for their parental controls on every sphere of life and influence.

But it must be noted from an unbiased estimator point of view that, some people are asking if the former is speaking as a former president of the republic of Ghana or if he is still in charge of Ghana.