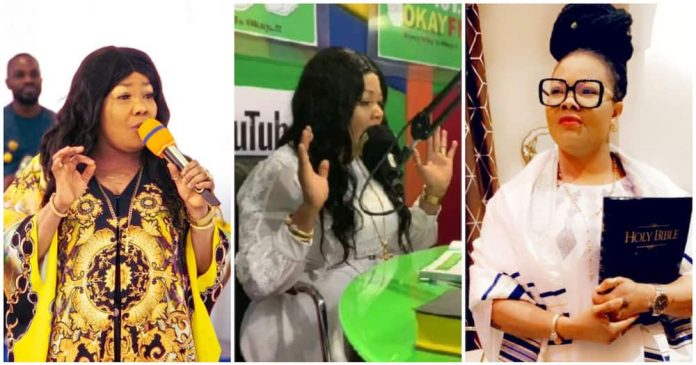 The owner of Thunder television, a media outlet managed and operated by Nana Agrada at Aplaku, in the Greater Accra Region of Ghana, has indicated that she is completely set, to return to the media scenes once again after breaking off from air distancing herself from the former practices considered and thought to be superstitious acts she had been exhibiting on her television channels to enticing more vulnerable individuals to seek her face independently for spiritual awakening exercises and consultations in allegedly, helping them to come out of their financial challenges and setbacks in life from all aspects of life for a fulfilling life living.

Nana Agrada stated that it seems to her that, she has been brought low after she denounced her earlier practices and accepted Christ Jesus as her Lord and personal Saviour but to her, she said, things are not picking up with her the way she is expecting it to be therefore, she is coming back to her former practices very soon and so, her customers should watch out for her as she is preparing fervently, to stage a come back to the scenes on thunder television which she owns and does her practical advertisement on for her patronizers to see how she does her activities and the traditional or superstitious acts that she engages herself in.

According to her, her viewers should patiently wait for her return this year on; Tuesday, 2nd August 2022 for such fascinating programs to be aired live on television as it used to be in the previous years before she decided to accept Christ and now that she says she is returning to her superstitious practices, it appears she will or has even dropped the Bible already because it is not clear to someone how she is going to blend the two practices on the basis, Christian religious practices are different from that of her perceived sorcery practice where she is even seen on television shows deceiving people that she has the power to charm or double money for those who need it and thus, those who need financial restoration and emancipation, their last stop is where they must come and meet her privately for her to find out the details of what they must bring as tokens before their financial debacles are sorted out from their lives totally for liberation.

It is somehow telling some people that, based on the conduct of Nana Agreda, who used to be a fetish priestess on thunder television and her private residence for many years, turned a Christian a few months ago after she openly accepted to be a servant of Jesus Christ and later, started to be preaching the good news to people from all walks of life where in some instances, she would either ignorantly or inadvertently, quote wrong and unfounded Bible scriptures to her suspecting people of the world.

There are replete reasons as to why many people do not take Christianity seriously nowhere because of such behaviors coming from certain individuals professing to be called the children of God but denying the power thereof. Even it has been observed that, if truly she was earlier genuinely called by the Holy Spirit, she would not have any superstitious thought in her mind any longer but because she was not called, she has now come out to be embarrassing herself coming from one religion into the other and within a twinkle of an eye, going back to the former, it does not serve tangible purposes as to why attitudes of that nature should be tolerated or it is because of the financial influence that she has on certain individuals in the country, she is thinking of using such a mentality to win the hearts of Ghanaian people in supporting her.

Those who are watching the whole scene, have concluded that she is just advertising herself because she is not any individual who must be relied upon due to her cross-carpeting conduct which no responsible religious leader in Ghana, has ever condemned yet by setting the records straight to letting other defenseless teenagers identify that yes indeed, there is a crop of people in our society, who are only interested in squeezing them of their sweat no matter the difficult moments that they may likely find themselves in.

But those who are birds of feathers with her would surely be elated seeing her coming back to her old superstitious practices which she used to stage on her television channel, thunder tv where her activities are broadcast live on air for all and sundry to see without any reasonable and proper television channel regulations guideline coming from the national media commission or the private association of Ghana Broadcasters as a stop-gap measure in curbing the negative effects that her sorcery activities are likely to cause to the teenagers who may perhaps, at the time of the program, be watching proceedings keenly for themselves in trying to ascertain if indeed her superstitious activities are genuine or a mirage.