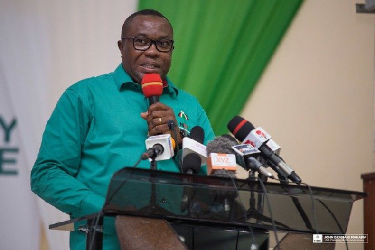 The main opposition political party in Ghana, the National Democratic Congress, (NDC) has registered its displeasure against the planning and intentions of the Electoral Commission of Ghana, who is fervently bent on using the Ghana Card as the only eligible criteria for voting of president and parliamentary elections in the upcoming general elections in Ghana.

According to the National Democratic Congress, it has received numerous calls from all walks of life that the Electoral Commission is deciding to using the Ghana Card for the elections which which possibly hinder and prevent eligible and qualified Ghanaian voters from voting because such individuals are having the voters identify cards but they do not have the Ghana Card because the Ghana Cards are not what they use during the periods of voting in the country but due to some kinds of grand scheme and clandestine pilfering activities, the secret deals being planned by certain unreliable figures to disenfranchise electorates from other parts of the country, they are determined to using such a tool as a requisite standard based formula for the voting for the presidential and parliamentary candidates.

The information communicated to the general public from the national head of the opposition National Democratic Congress, it has disclosed that it is not going to allow the Electoral Commission to use the Ghana Cards during voting because a lot of Ghanaian voters are qualified to vote but they are not in full possession of the Ghana Cards but rather, it is the voters identify cards that they have because it is what is used in voting here in the country and not Ghana cards.

The National Democratic Congress has pointed it out clearly that, any attempt by the government in support of the Electoral Commission’s decision to using the Ghana cards for the voting in Ghana because it knows that it is going to be in its favour, it will severely be objected to and fiercely resisted by the members and leaders of the National Democratic Congress in the sense that, the conduct and dictatorial regime that the Electoral Commission seeks to embark upon.

It is a very dangerous, repressive, obfuscatious, repugnant and it only aims at preventing and disenfranchising certain crop of people who they are meant to be in support or favour of the main opposition political parties due to the bad governance experience Ghanaian people are struggling to fathom with.

The Electoral Commission has not yet finally disclosed how exactly she is going to do their activities and programmes but some of the opposition political parties are claiming that the EC is highly bent on taking actions that are likely to endanger the very peaceful nature of Ghanaian people which will be seen as an attempt to obstruct them from exercising their franchise as mandated in the 1992 constitution of the republic of Ghana as part of their civic responsibilities.

Many people in the main opposition political fronts, are suspicious of the decisions taken by the elections body in the institution of the Electoral Commission with the assumption that, the institution is secretly planning to work in favour of the ruling government and its political appointees based on that, they have started crying foul already so that the whole world will come to their aid with the brain behind it as a factor to stop the wicked forces in running the affairs of the country Ghana.

Ghanaian people have welcomed the remarks churned out by the opposition National Democratic Congress saying they will not agree with the choice of Ghana cards over voters identify cards because many of them do not have the Ghana Cards yet in their possession despite registering for it.

In another development, the former Head of the Electoral Commission, Dr. Kwadwo Afar- Gyan, has admonished the current Electoral Commission boss and the entire hierarchical authorities that, they should desist from any attempt by using the Ghana cards as the only means for the voting in the upcoming general elections if they know that their decision is going to greatly affect and disenfranchise electorates from choosing their next national leaders.