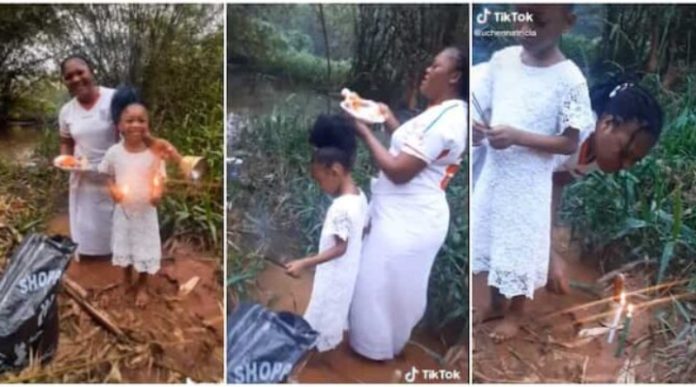 A Nigerian woman surprised everyone by taking her kid to a river to celebrate her fifth birthday.

In a video she uploaded on TikTok, the mother and the young celebrant were both dressed in white while she performed rites there.

She kept lit candles and other items associated with fetishes in a dry place. Her video received mixed reviews.

In the comment section, the woman stated that the water was the one who actually gave her a child. She stated that her child almost didn’t survive after birth before she realized her true roots.

She explained herself by saying;

“Until I took her somewhere &was told what to do, and I did, I as well went to water for her sake, my baby became okay automatically, life is a mystery. I almost lost this girl after her birth, I never knew that she was a dada child, I was busy combing her hair and she was busy planning to go back, until.”