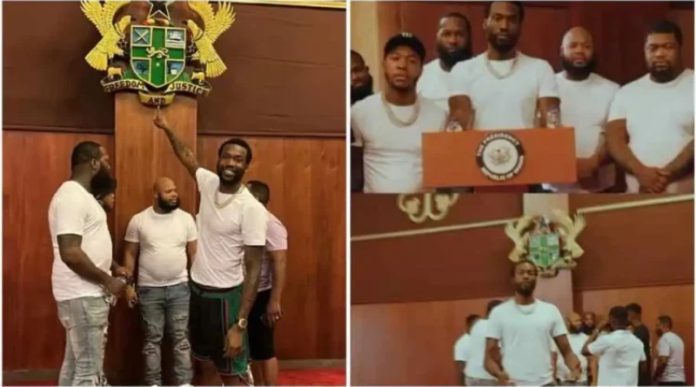 Meek Mill, an American rapper, has apologized to Ghanaians for the controversy surrounding a video that has made headlines since Sunday night, January 8.

Ghanaians were particularly critical of Meek Mill on Twitter and Facebook for using imagery from the presidency, Jubilee House, in an upcoming music video.

The aforementioned video was previously put on his Instagram reel but was removed early on January 9’s Monday.

He posted his apology on Twitter stating thus: “My apologies to the people if any disrespect! We still gonna push to make the connection between black people in America and Africa … what I’m trying to do is more than a video and you should see coming soon! My apologies to the the office also!”

In another tweet, he explained: “I don’t think they knew it was video footage when we asked to shoot its a small camera and one kid … in America we didn’t know this existed and was excited to show because they don’t show Ghana on our media much! So I’ll take responsibility for my mistake! Not intentional.”

In the video, the rapper is sighted in different places at the presidency, from the frontage, through the main corridors, in the main conference hall – at a point positioned behind the presidential lectern – and later in a sitting area rapping.

Social media users are incensed about what they describe as near desecration of the presidency, citing moral and security grounds.

Major influencers on Twitter especially have attracted comments that are largely critical of government for allowing such sensitive areas to be filmed for a music video.

It must be noted that a small portion of the commenters are justifying it, stating that it is not too much of a big deal.

To the people of Ghana no video I drop is ever meant to disrespect the people of Ghana …. The fastest way to make connection is thru music and I wanted to do that with displaying art … im in my 30’s from America and didn’t know much about the lifestyle here— MeekMill (@MeekMill) January 9, 2023