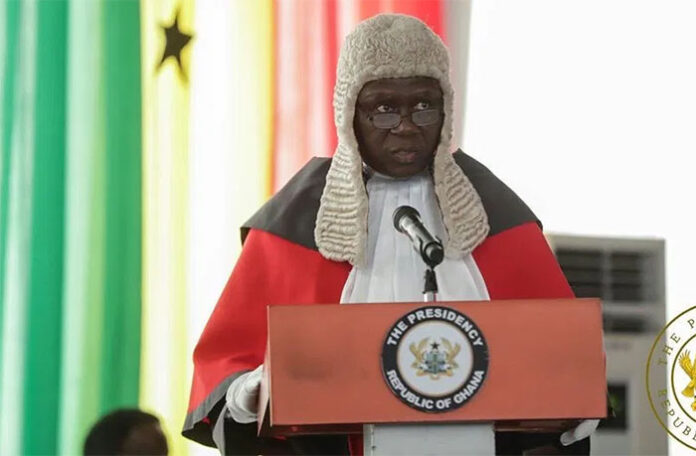 The Chief Justice and the head of the Judiciary in Ghana, Justice Kwesi Anim Yeboah, has stated that, work or duty of the magistrates and justices in Ghana as a whole, will be counter productive if only few people they adjudicate cases for, obtain true justice deliver system fairly without prejudice and favouritism.

According to him, it would be practically meaningless on the part of their mandates as justices in the country if the general public opinion polls about their role in justice delivery in the country asserts that, they are bias and partial shaded with secrecy when matters are being brought before them for a redress.

He further stated that, he is quite conversant with what pertains in the media scenes being the fact that, people with little or no tangible legal educational qualifications or backgrounds have taken the justice delivery system in Ghana to the cleaners thereby reducing the moral dignity of the legal profession to a complete instances of rubbles.

He is therefore urging the public most especially, those who are bent on commenting on criminal matters where the cases are still being under consideration and perusal, to be very mindful and circumspect discussing such because, the duties of the magistrates and justices in Ghana, are beyond what the public opinion about their works seeks to portray and paint to the other people who are not well fitted into proper and fair adjudication of legal matters in the country when it comes to the mandates of Judges in the country in general.

He also bemoaned the public perception index analysis against the justices of Ghana that, they are corrupt and complacent in the delivery of matters brought before them and argued that, the public opinion about how justice delivery system grinds in Ghana, will not be the real state of fact on the ground before, if those in public places are assuming that, it is only the few clients who file cases before them, receive fair and transparent trials due to their financial background and asserted that, if that being the opinion against the justices and magistrates in the country, then, their roles and duties as justices in Ghana, will be meaningless if it is true that, it is only the few who obtains justice, then, their work as Judges will be a total waste of resources and meaningless as nothing in the country.

Many Ghanaians could not hold their breathe for a minute when it came to light that, a dozens of the superior court justices procured public vehicles unlawfully contravening aspects governing the financial management regulations during and after which the chief justice, Kwesi Anim Yeboah was totally cloned down in a state of utter silent.