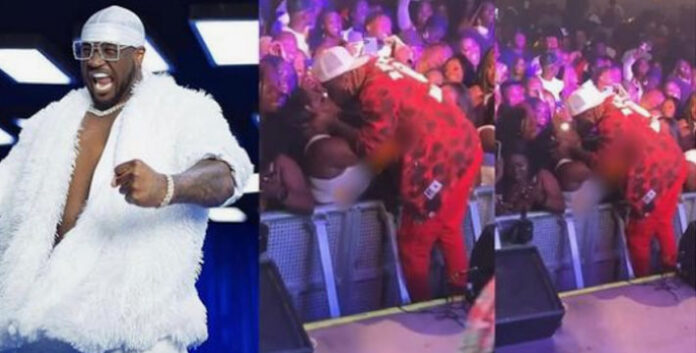 It has been reported that, large quantum crowds stormed the centre of Dallas where the entertainment legend of Nigeria Paul Okoye

performed a live concert in the land of a white man where the celebrants were taken by the storm during which the singer deeply played a romantic comedy with one of his female followers in the full glare of the general public as they watched on helplessly after which some of them present fainted in their panties in the process because of how seriously the guy engaged the lady who admired him by intentionally and consexually locking up lips with the lady in the process.

Paul Okoye, who was billed to perform during a concert show on Dallas, took advantage of his artworks and rather ventured into playing deep rooted romantic comedy with the said lady who was not far from the stage where he stood before he was performing during his engagement of the expected show.

It is not however clear if he is known to the said lady or the purported lady is known to him but some people on the ground stated that all was just a prank in an attempt to charge the presence of the euphoria on the ground to reach its fullest extent of crescendo as the singer geared up in electrifying the podium properly for the continuation to activities to triumph.

In the entertainment industry, everything happens for fun but we must be guided by what we do because our teenagers are also watching the proceedings of our actions from different angles which could easily hypnotise the way their attention or focus is being glued down for that specially designed activity expected to be undertaken by whoever is billed to sanction such an amazing spectacular instance of performing creditably well unlike those who are bent on displaying their private parts which must be kept well from the viewing pleasure of the general public entourage.