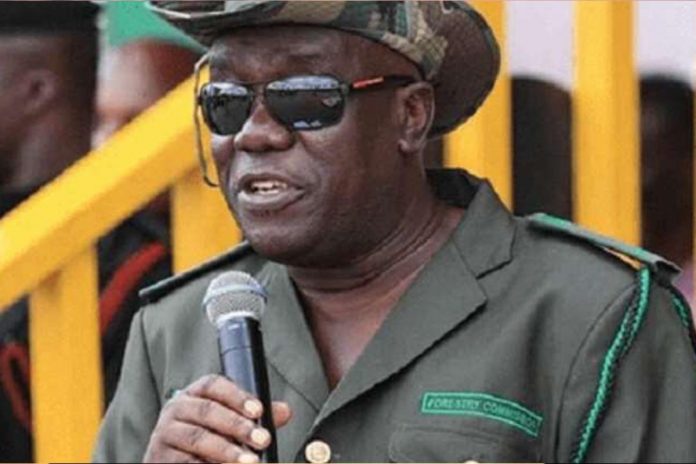 The former general secretary of the governing New Patriotic Party, Kojo Owusu Afriyie, has been exhumed from his grave to answer serious charges leveled against his person due to some lands under contention at the Achimota forest reserve.

Sir. John was the former chief executive officer of the forestry commission of Ghana before he departed from the land of the living. He is being accused of leasing or selling portions of the public lands at the Achimota Forest zone to people believed to be his families and friends. He has been suspected to give many lands to some of his closed relatives and he documented such lands secretly as part of his personal will desire to certain group of people after his bizarre demise.

People who are entrusted with state resources, are cloning and sharing natural settings amongst themselves causing the poor to be paying and forfeiting every evil agenda undertaken by such heartless baboons without recourse to the laws of the land.

The ministry of lands and natural resources, has launched a full scale investigation into the whole enterprise to arrive at a clear understanding of what actually happened before, during and after the tenure of Kojo Owusu Afriyie as public lands were alleged sold by him to some top class citizens of the country because he was the over all boss after he assumed office as the forestry commission officer.

There is no level of morality in the country as we speak because, what is being done by the leaders of the country, it bothers on whether they are human beings with conscience or not. There are some reasonable thoughts why some people will perish and you must not sympathise with them. The reason being that, you may not see what they are doing behind the scenes but God sees and watches all of that.

Nobody should express condolence or to mourn with such unscrupulous individuals whose aim is to enrich themselves and acquire massive wealth at the expense of the poor ordinary people of this very nation. They do not have the second thought to think that if every body were to be selling such natural resources, will such properties be available today for them to be sharing among themselves?

People who are concerned about this very topical issue, are watching closely how the ministry of lands and natural resources are going to resolve this revealing matter that has exposed the stinking annals of some top government officials as allies of this current administration. The minister for lands and natural resources, Abu Jinapor, stated that they are going to look into the matter to bring the real facts out so as to settle every form of suspicious of the parts of some government officials aligned with the current regime.