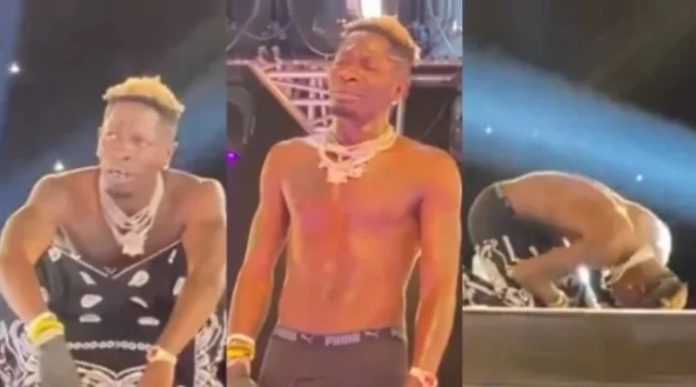 When Shatta Wale observed the enormous throng surrounding his Freedom Wave Concert, which he co-headlined with his bestie Medikal at the Accra Sports Stadium, he was unable to control his tears.

The leader of one of Ghana’s largest bases, the Shatta Movement, nearly packed the Sports Stadium, which can hold 40,000 people. He was overcome by the sight of his admirers showing up in large numbers to support him.

He sagged on the stage in tears, unable to control the feelings that had been rising inside of him.

Intermittently, he put himself together and uttered;

“…if we want to fill the Accra Sports Stadium we can fill it but when we fill it they should say we have filled it because it is not easy…this December the fans can come and fill the other side. We want to invite everybody to come to celebrate Christmas with us,” the dancehall artiste said.

After the success of the show, he took to Twitter to thank his loyal fans for showing up for his concert, writing: “Thank you SM Fans. Thank you again loyal blood SM fans. I owe you my life.