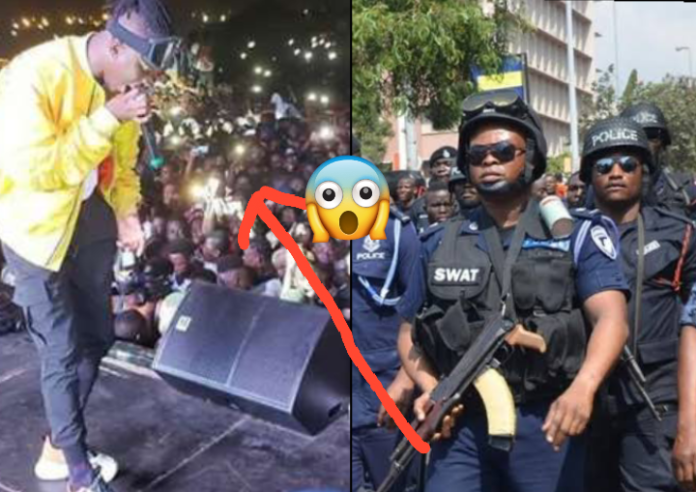 The Ashaiman District was in the news before and after the just ended week bade farewell to all and sundry as a very well publicised street Concert was touted and much spoken of to be taking place in the community as an attempt by the organisers of the show to market the Ashaiman District to the world that indeed, something good and extraordinary could also come from such a deprived and disliked environment as erroneously impressed by certain elements of society who do not want the community to grow.

During the activities leading to the event, some individual members who patronised the occasion at Saka Saka park in the Ashaiman community, engaged in acts of insurrection and public disorders which compelled the police officers attached to the Ashaiman District Police Command to effect some critical arrest immediately so as to bring the unfortunate disturbances witnessed during the concert dubbed Ashaiman To The World Concert under control.

According to some eyewitnesses on the ground, upon the arrival of the public police officers on the ground, they briskly aimed and targeted how to arrest and detain some prominent members of those who planned and organised the show where they received some credible assurances that one of the celebrated dancehall artiste in Ghana was part of those who agreed unanimously to embark on hosting the event on the park of Saka Saka in the community.

But suddenly when the police officers showed up at the scenes of the much touted street concert, they searched out for only their celebrated playmaker who made sure everything came on live and coloured with the sense of an appreciation for their teeming audiences who could not wait to see him live perform on that fateful day.

But in a rather surprising and startling twinkle of an eye, the police changed their thoughts and headed towards the direction of the dancehall artiste, Stonebwoy when sensing and perceiving danger as his nerves continued to quiver in their shelves, Stonebwoy escaped an arrest from the police officers who attempted and tried doing so.

In some instances, the report had it that, their dancehall artiste, Stonebwoy, received a prompt few minutes before the said police officers arrived at the scenes which gave him an upper hand over the police officers and their tactical shotgun and shells as he magically maneuvered his ways out of the ground to avoid being arrested during which he successfully got through.