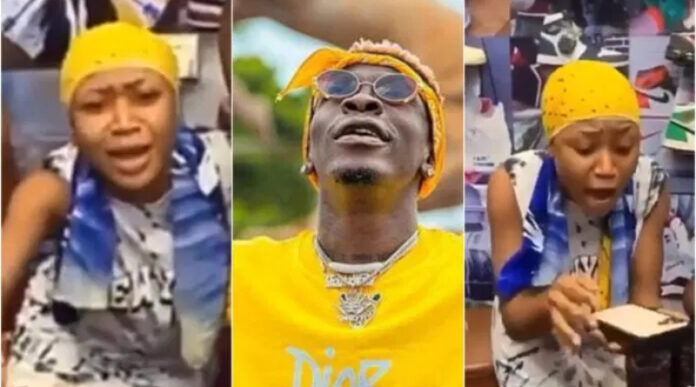 Akuapem Poloo was overwhelmed with so much emotions when Shatta Wale gifted her with a brand new iPhone 13.

The popular Ghanaian socialist, actress and video vixen was asked by one of the frontrunners of the Shatta Movement to come over for a gift the Dancehall & Reggae artiste who is presently out of the country has instructed him to give to her.

An excited Poloo got to the venue in anticipation of getting some sleek dresses or a pair of shoes evidenced in her statement when she was interacting with Wale’s representative.

To her surprise, the man handed her an iPhone 13 Pro Max and the drama that ensued is a potpourri of emotions that could potentially get you emotional as well.

Poloo was in the news recently, when she sent warm wishes to her American friend and superstar Cardi B after winning a defamation suit against YouTuber Latasha Kebe.

The ‘I Like it Like That’ spitter sued the blogger for defamation, invasion of privacy and intentional infliction of emotional distress over false claims that she had herpes, used cocaine, and worked as a prostitute.

Billboard reports that Georgia jury awarded Cardi $1.25 million in damages after two weeks of deliberation and also convicted the YouTuber of invasion of privacy through portrayal in a false light.

A furious Cardi B has claimed Kebe fabricated all that she shared on her YouTube platform, and consequently dragged her to court in 2019 over dozens of videos of wild allegations that the rapper “f–ked herself with beer bottles” onstage when she was working as a stripper. Read more from here…