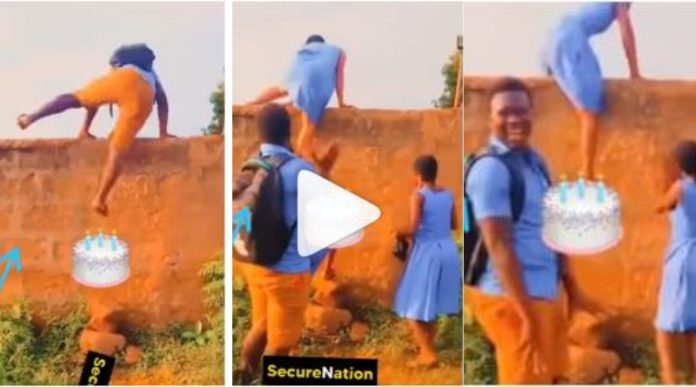 It is against Ghana Education Service rules and regulations for a Senior High School (SHS) student to leave the school without asking permission from the school authority.

As a result of this, some of these students have devised their own ways of running away from school without asking permission from their teachers.

Five Senior High School (SHS) students, probably between the ages of 15 and 18 years have been recorded on camera jumping their school fence to run away from school, and many social media users after coming across this couldn’t keep mute over it.

These students comprise three girls and two boys. Because the fence wall is a little bit high. The boys used blocks to form a staircase on the wall. The boys told one of the girls who goes by the name Ruth to climb the wall first.

She puts her legs and jumps on the wall, however, you can see her thighs and some parts of her private part because of her short dress and how she climbed the wall.

The second girl to climb the fence wall was Sonia, and she jumped the fence wall smoothly as if she is a boy. The boys were overheard in the video saying that she is an expert when it comes to this because of her long legs. The third girl also jumped the wall quickly and the two guys also joined them. Some social media users after coming across this video said that this is a normal thing in SHS but you have prayed that the school authority doesn’t catch you.