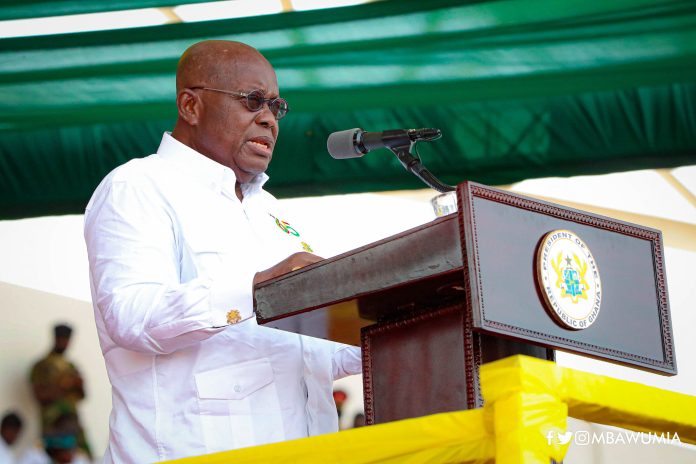 The president of the Republic of Ghana, Nana Akufo Addo has given a strong indication yet that he is not obliged to expending state resources on the negligence of some irresponsible people in the country as the weather causes rain from above here and there.

According to the president, what we are seeing aftereffects of the rain which fell over the weekend, were as a result of repressive conduct on the part of certain faceless people in the country. He stated that the damages seen when the rain subsided after a torrential weather, was a manifest of not properly managing our refuse system prudently and therefore, he is not liable for any blame game by any means to solving the perennial flooding situations in the country most especially, the national capital, Accra.

The president used to opportunity to give his presidential authority to all the Metropolitan, Municipal and District Chief Executives, to as a matter of an urgency, pull down all the buildings that were illegally constructed without any building permit, to be destroyed by his prerogative power.

He has instructed that, any structure which obstructs an easy flow of water as the rain continues to set in, must be demolished without any recourse to humanity because, the level of an indiscipline in the country, has reached its highest proportional status and due to that, there is no mercy for the crippled this time around in the history of his reign.

The president further cautioned those who always indulge in dumping their waste materials into the drains to desist from such activities because, if the law enforcement agencies catch up anybody flouting his directive, that individual will regret the rest of his or her life time experiences in the country.

Buildings have been constructed in the national capital of Ghana haphazardly without building permit as to whether such sites are safe enough for the building of structures but the agencies authorised by the stipulated rules and laws of this very country to check such anomalies, would by no means executive its mandated duties of safeguard the sanctity and the integrity of the state and the institutions as a whole.

It is as a result of these failures on the part of those authorities that the president was unequivocal in his instructions given to the metropolitan, municipal and district chief executives to go all out to under a national security operation to destroying and ruining every form on unauthorised constructed on the waterways that are orchestrating against the free flow of water whenever the weather pours blessings from above.

His directives took effects immediately after his announcement and it is expected of all those he gave the orders to, to resume that inconvenience national assignments this very morning to allow free flow of water passage in the national capital and other flood prone areas of Ghana.

But it is believed that, as he gave the instructions, some notorious elements could use the opportunity to go on rampant rampage to causing chaos and commotion by pulling down buildings that are not earmarked for such undertakings.