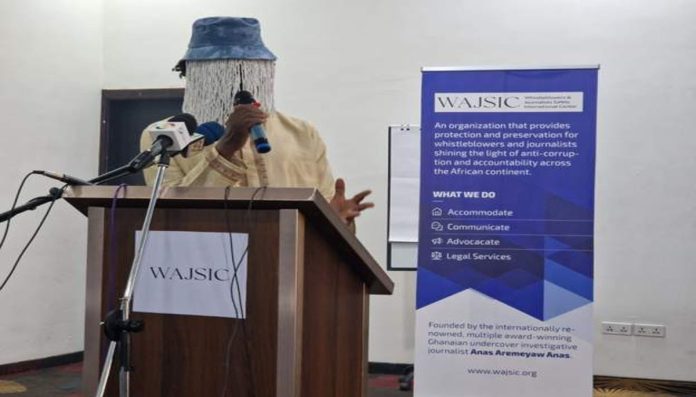 An exclusive international undercover journalist, Anas Aremeyaw Anas, has launched a daring and thought provoking centre which is expected to be protecting the lives investigate journalists in the country.

The invention of the hub has become necessary as journalists in Ghana and else where are being killed, harassed and gagged day in day out. Anas thought twice about the whole incidents and came up with such an innovative idea which is being endorsed and applauded by those who the centre is going to save in line of their respective duties in Ghana and other places.

The creation of the hub is very important because, the increasing rate at which government officials and other political bigwigs are coming up against investigate journalists after any corruption case or cases is uncovered indicting them of their revealing involvements because, such secrets are being exposed into the public limelight.

Anas has been doing his investigate pieces with other private investigators domestically and foreign and due to the reverence he has for all of his working cohorts and partners, he respectfully opened up the occasion with them harmoniously to inculcate neighbourliness and brotherhood among all and sundry.

But on the side of this incumbent administration, the launch of the Tiger Eye Private Investigators hub to curb the fast increasing rate at which journalists in general are being killed in line of their lawful duties, it has sent a very strong wave into the annals of government and its officials as it considers the launch of the centre in a half way, a threat to the government of the day because, the hub is going to vigorously undertake rigorous exercises to fish out malicious and wicked corruption cases under the regime of this present government and its officers and due to that, they are livid that such an establishment has been inaugurated by the private investigators, involving Anas Aremeyaw Anas himself because he has become a major threat and a thorn in the flesh of government after he uncovered massive corruption cases which shook the very foundations of Ghana.

The investigation, found political bigwigs associated with this unreliable regime, culpable of engaging themselves in criminal activities and looting the reserved of the country at the detriment of the vulnerable and Ghana as large. The name of the hub which is expected to secure, protect, defend and support every form of journalistic endeavour, was glamorously launched by Anas and seven other robust and austere investigators with the name; Whistleblowers and Journalists Safety International Centre.