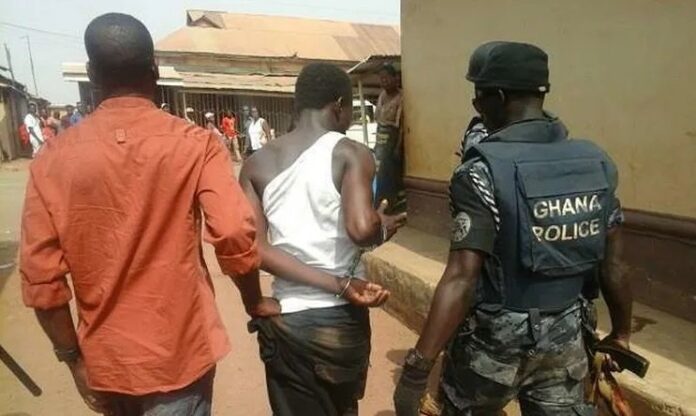 A young man who is rather expected by society to transform and touch the lives of other up and coming individuals at large, has found himself in the excruciating net of the Ghana Police Service officers in the Central region for allegedly beating severely, his uncle to pulp which suddenly led to his untimely death.

The suspect, One Yaw Benedict, was alleged to have demanded for certain amount of money from his uncle in the Assin South of the Central region of Ghana so that he could use it to buy wee for smoking but unknown to him, his uncle blatantly turned down his request which resulted in some unfortunate scuffles between both after which the culprit unleashed his wrath and vexation on his uncle and dragged him on the floor during which he forcefully and mercilessly gave him several counts of assaults and blows on his body parts and the said uncle became unconscious of himself. According to some eyewitnesses in the community, the suspected hooligan and riffraff individual, is locally noted for smoking wee in the area seriously no matter the persuasion from anybody, he would not listen while refusing deliberately to be engaging himself in something meaningful and productive but he only resorted to smoking wee and living his life recklessly in the community which is a threat to the lives and properties of other people who are putting up in the Assin South territories.

Based on the details of the unfortunate incident, he the culprit who has finally been arrested by the police officers in the constituency at last, because furious and angered by the refusal of his uncle to file out the money he asked him for not to be used on anything tangible but rather to be used in purchasing wee and due to that purposely reason given by the young man to his uncle, the uncle this time, ignored his demand and denied him from having access to what has been pleaded during which the said Yaw Benedict descended on his uncle and disciplined as if he were an infant after which the uncle lost the zeal and control of his life and gave up his ghost spirit as a result of severe and painful beatings he received from the suspect who is now currently in the firm grip of the police officers in the Assin South district for committing an atrocity against the life of the departed individual.