The host of “Gyaso Gyaso” show on Okay FM, Afia Pokuaa has sent a bold message to some Ghanaians who have used Kofi Adomah’s attack as an avenue to make a mockery of him.

In her recent post on Facebook, Afia Pokuaa revealed that no matter how much people mess up, nobody has the right to attack or brutalize them. She added that people are shedding tears on social media while others are using the opportunity to mock Kofi Adomah.

She served a notice that no matter what a person does, people should not use brutality or attack that person as a way of revenge.

“Those who are making a mockery of Kofi Adomah’s attack eh, pls sensitive small. No matter how much he has messed up nobody deserves to be attacked and brutalized. The same people will shed crocodile tears if something happens to him, God forbid” she posted. 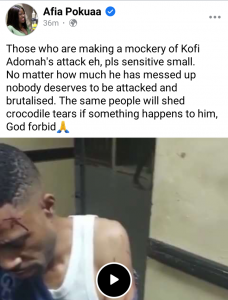 Kofi Adomah Nwanwanii, presenter at Angel TV was recently attacked by some unknown men. According to reports, he was attacked on Saturday when he was returning from DAMAX estate in Kuntunse, a suburb of Accra.

He was crossed along the way by some men who were riding motor bike. This sad incident happened at Ashongman. The unknown men used some sharp objects to cause some injuries to him. Reports also reveal that he was nearly set ablaze by these criminals.

The Ghana Police Service are currently investigating this matter and the media would be briefed very soon with their findings.