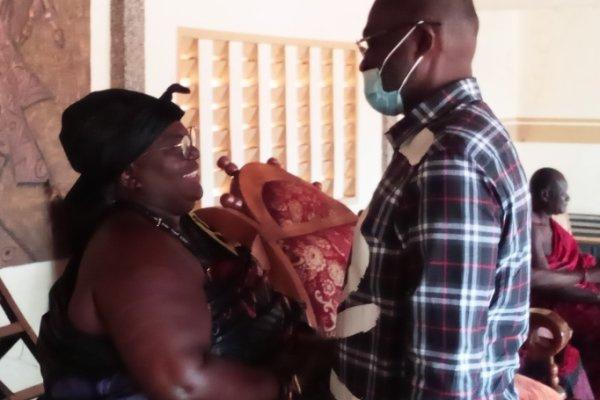 Net2 Television has been showered with songs of praise by one of the notable queen mothers in the country for fishing out some fake pastors who are bent on taking advantage of innocent Ghanaians and duping them under the pretext of dealing with their spiritual and religious needs just to extort money from them.

The queen mother of the Sunyani traditional area, Nana Akosua Duaah Asor-Sika Brayie, the 2nd, has commended the owner and the bankroller Hon. Kennedy Agyapong, for undertaking such bold and fearless steps to eliminating half-baked pastors in the system by using the channels of his Net2 Television airwaves to reach out to some ignorant and naive members of society despite several warnings given to such gullible people to be wary of quack elements who are parading themselves as men of Ghana just to amass wealth from the suffering of the masses in the country.

Hon. Kennedy Agyapong was highly elated to have received such a noble acclamation by the revere queen mother of the Sunyani traditional area.

Kennedy Agyapong used the occasion to plead with other television owners to also take a cue from what has has initiated by using his television channels to expose pastors with suspicious characters from deceiving the general public whilst extorting money from them with the assurance that they would exorcise some sort of evil forces attacking them blindly.

The queen mother of the Sunyani traditional area is one of the few Ghanaian traditional leaders who have the sanctity and sanity of society at heart thereby urging and spearheading activities relating to uncleanness and illicit drug peddling to be rid in the communities for a cleaner environment.

The queen mother used the opportunity to urge Ghanaian religious believers to be on the lookout for those that they smell a rat of by volunteering information to the public security forces to come after them so that the society would become a peaceful place for us all to living in because the police officers can not do all alone but with support and collaboration from the community dwellers, something meaningful could be achieved at the end of the day.

No Matter How Much He Has Messed Up, Nobody Deserves To Be Attacked – Afia Pokuaa Serves Notice

Jesus Is Just A Child Of Someone, He Is Not Real – Kwaku Bonsam denies originality of Jesus