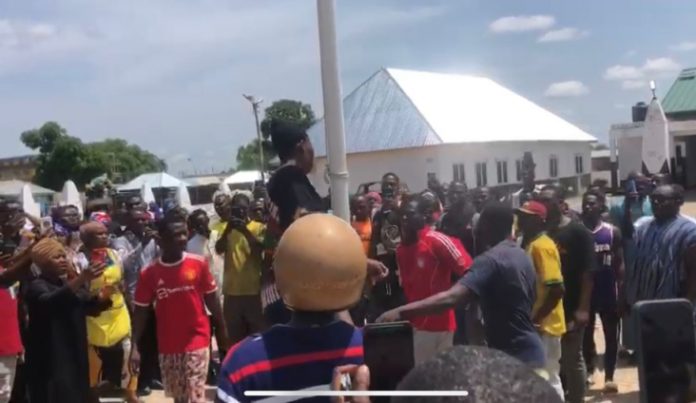 Police in the Upper West region have arrested three persons out of the other absconded ones who severely unleashed countless lashes on the two individuals whose sex tape is currently making waves on social media.

The police officers in the area after receiving a tipoff of what had happened chased the alleged gangs who engaged in the beating of the two lovers.

The chief in the area has confirmed his involvement in the case stating that he was the one who ordered the flogging of the two who committed themselves into such an immoral act which is considered to be obscene. Those in the town thronged to the scenes to witness the lashing of such people where many gathered to seeing things for themselves and truly their eyes beheld what exactly they were expecting to see for themselves.

The two lovers whose sex tape is making round in the media, released the video onto the Internet either knowingly or unknowingly and it has led to the ongoing shame and embarrassing situation currently ongoing in the community after lustfully enjoying their flesh by satisfying their sexual passions and pleasures.

It is not how ever clear why such people could devote themselves to private sexual activities and then publish it onto the Internet for other people to have a feel of what they have done or undertaken in their secret places.

The security officers in the region are on the heels of the other alleged people who involved in beating the two lovers who are currently nursing their bodily injuries and excruciating pains all over on their body parts.

As three of those who beat up such lovers have been arrested, it is quite clear that the other remaining individuals who are currently hiding in some unknown locations either in the community or out of the town, the security officers would still launch a manhunt for them after they took part in that draconian act which resulted in the harms and injuries inflicted on the lovers.

One will just surmise that, due to the painful injuries caused those two lovers as they are still nursing their pains and sufferings, the enjoyment they had during their sexual encounter has diminished from their minds because the pain alone has taken the place of their enjoyment.

This happening has sent a very strong warning to the youth in the area as they continue to ponder upon what has transpired since any of them could be caught engaging in same or similar conduct which may likely bring the anus of such an individual into the public limelight.