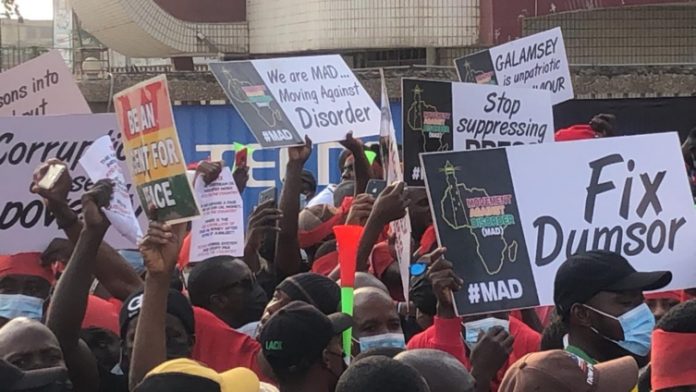 The police administration has denied the organisers of the fix the country group, their intended demonstration slated to take place on 4th June, 2022 where they requested from the police administration to allow them to register their displeasure about the happenings in the country with their own guns and other forms of ammunition to protect themselves from any unlikely event that may occur as they learnt of some suspected group in one of the politically dominated institutions, is planning fervently to counter what they planned to do on that fateful day as part of their legally enshrined rights constitutionally approved to do in the country.

According to them, the information picked up suggested that some faceless elements are on the verge of clashing with them on a brute force notes hence their decision to protest fully equipped with armed so that they can defend themselves on that particular day but the police administration has kicked against their request.

The group which is planning to demonstrate on 4th June, is trying to insinuate that they the members do not trust the public police officers to providing them adequate and maximum security protection when the need arises because it is expected in one way or the other that, things could go out of hand on that particular day when things unfold and due to that the police officers assigned to provide them with their security needs would be overwhelmed due to the larger number of people who that are highly hopeful of turning out to join the demonstrators when they tour some principal streets of the national capital of Ghana, Accra.

The members of the group continued to giving numerous reasons as to why they intended to protest with harmful weapons that could easily trigger and incite violent scenes and unsightly spectacles when they pour out on the streets on Saturday.

Even though the police public administration has granted them the permission to demonstrate, they have chosen another path that is going contrary to what had earlier been agreed upon with their thoughts that, they being politically motivated group, they are likely to be attached and mailed by the opposite political force members who are in tune with the incumbent political party that is governing the country at the moment where some other people in the various opposition political parties are totally livid about how the country presently is being ruled and governed.

Their suspicious thoughts at the back of some past scenarios where previous government officials thoughts that such demonstrators would be making their regimes unpopular hence their decision to launch reprisal attacks and unleash harsh brutal forces on them as an equal measure and due to those instances, they have learnt their lessons and now they wanted to fully arm themselves to match those who may try to attack them this time around boot for boot and bumper to bumper to let them know that yes, they are equally up to the task.

Ghana is believed to be a peace loving nation but the peace loving people who dwell in the country are becoming notorious and violent day in day out due to the cases of alleged corruption and bureaucracy being reported of on daily basis even though the government is quick to deny any wrong doing.

It is because of such anomalies that many people have lost confidence and trust in the current state of political leaders we have in the country whose main focal point of leadership mantle today is to amass wealth for themselves at the detriment of the vulnerable.

We are currently putting our eyes across to see how things will pan out between the police forces and the organisers of fix the country group to see if they demands about using ammunitions to demonstrate would be met on the ground of envisaged maximum number of protesters expected to turn out or the police would still stand on their ground to defy their such dangerous requests to be permitted to demonstrate with guns which might be the first ever in the history of Ghana since she attained independence from the British Colonial rule.