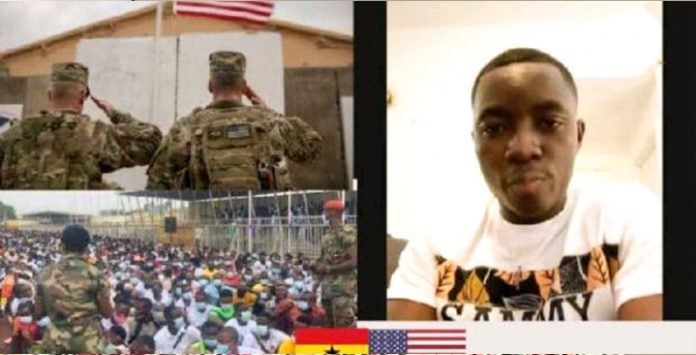 A Ghanaian national who is currently based in the United States of America, has revealed the difficulties that he faced emanating from his utmost eagerness to joining the military forces in Ghana so as to serve mother Ghana but he was frustrated because he was not having money and connection to do so.

According to the young enterprising exuberant, Samuel Kusi, who has been enlisted into the military force of the United States of America, USA, he tried many avenues possible so that he could be recruited into the service in Ghana but he was not given the nod in his mother country because the amount of money requested from him to pay before he could get the opportunity, he was not having it and due to that the chance eluded him big time in the country of his ultimate birth but there is nothing like that on the land of the white man where he is currently a military officer serving in the service of the United States of America joyously.

Samuel Kusi indicated that, he did not pay any money before he was enlisted onto the military in the United States of America because they do not practise our system of whom you know and monetised regime where you have to pay huge colossal amount of money to Ghanaian officials before you are enlisted but he is enjoying now in the army of the United States of America where he did not pay even a pesewa to serve in the military of a foreign nation leaving his own mother land behind because of problems of not having the wherewithal and connections with anyone at the national level to facilitate his recruitment processes.

Samuel Kusi further stressed that because of how Ghanaian people are treated in their own country, that is the main reason why no meaningful Ghanaian citizen would like to die for the country as a patriotic citizen due to some of those hitches and obstructions meted out to them as vulnerable individuals emanating from those at the helm of affairs for the country Ghana.

The expos’e echoed by the young Samuel Kusi, who is now serving in the Army of the United States of America instead of Ghana his mother land, it has sealed the numerous reports filed by our reputation media outlet that pertaining to the monetisation of the public security services in Ghana where you have to pay unspecified amounts of hard currencies to some hierarchical authorities in charge of recruitment processes before you could be enlisted to be in the public security institutions in Ghana.