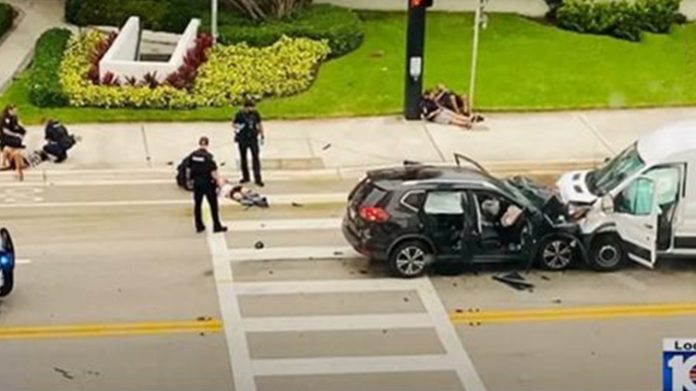 It is somehow weird and incredible to believe how some people in the world could easily ruin the precious lives of others just in the name of the flesh which is highly noted to be a secret contact between both varying genders as to complement the effort of each other after a mutual consent.

There was this very fatal and life threatening accident which occurred in Florida where the vehicle in which some thought to be lovers engaged in sexual encounter in the cause of their driving journey whilst on the steer of the car. It is said that, a passenger who could not hold herself tight during the journey, quickly maneuvered her way into the pant of the male driver to just connect her body with that of the driver’s own in an attempt to satisfying her sexual lust which engulfed and entangled her five human senses completely and she totally got detached from her thinking faculties.

It had been confirmed that, the lady devoted herself in an oral sex with the driver who was manning the steer and due to the touch of the sensation he was receiving from the female passenger in his car, he completely lost focus and crashed head on over with another car belonging to Fedex group of companies in Florida.

The medical superintendents have established that, the two loving birds had fractures in many places of their bodies and most importantly, their private parts have been severely damaged in the process which left people thinking what could have been the inspiration sensed by such two individuals on a highway, travelling to their respective destinations.

There is nothing much shocking though how many people in the world have given up their lustful to destroy their attractive and well crafted nature that God endowed them with but due to the worldly pleasures of this contemporary world, they have turned their valuable body parts into the den of whore where jackals patronise their immoral trades to also satisfy their flesh as the desire demands.

It beats the imagination some as to why a man on a driving steer of a highway journey should be engaged in with an oral sex leading to a near loss of the lives of both individuals who in a halfway through their journey could not exercise restraints as they allowed their sexual libido to drive them into their near grave without feeling ashamed of such misdeeds on a public path where others travelling as well were using the same roads with them without committing themselves into such a shameless activity.

There are other people who seem not to be perturbed about what happened to those individuals who got their private parts damaged severely during their sluggish engagement of an oral sex in the car on a highway because, it is assumed that such characters and conducts are parts of their cultural which should not in any way attractive those who value their wealth bodies.