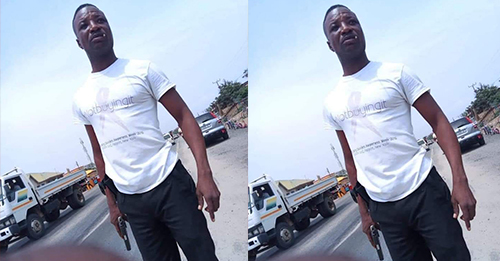 There is a heart striking news come from parts of Kasoa where a certain gun welding man is causing fear and panic to commuters and the residents as a whole.

The man, blazingly displays a guy in public wherever he sees people in their multitude in his attempt to exhibit his prowess by terrorising everyone he comes up across on the road. From the looks of things, it appears as though the man in contention, is a police officer due to his trouser he wears.

He is visibly seen holding up a guy as if he is a public security officer working under certain authoritative instructions. The police officers in the Kasoa have denied ever knowing him or working with him at anywhere.

The earlier information trickling in confirmed allegedly that, some disobedient motorists were flouting traffic regulations hence his decision to mount a check point in restoring sanity and order in the vicinity.

But, the moment the Kasoa District Police Command got wind of his suspicious character, he was quickly arrested pending further detailed investigations into the matter.