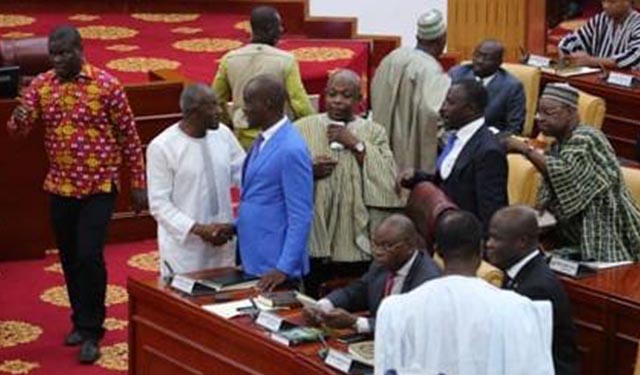 The NDC members of parliament who are on the minority side in the chamber of the lawmaking house, are protesting against what they termed as “unconstitutional” the bill that had been passed illegally by one sided chamber of parliament.

The members of the National Democratic Congress, are contesting the eligibility of the passing of the e-levy bill which seeks to mobilise resources from Ghanaian momo users without the prior approval from the minority caucus of parliament.

If our readers could recall on Tuesday when the Black Stars Of Ghana locked horns with the Supper Eagles of Nigeria, the majority chamber in the house of Parliament, led by their leader, Hon. Osei kyei Mensah Bonsu, were in the house at the blind side of Ghanaians whose foci were on the ongoing football encounter, unilaterally and clandestinely, passed the e-levy bill without any recourse to the minority side of the house.

Earlier, it was broadcast on some credible news sources that, on the final date of the bill to be passed, few members of parliament on both sides of the house were not present when the bill was passed.

Now, the minority members, being led by their leader, Haruna Iddrisu, are heading to the Supreme Court of Ghana to challenge the rambling style under which the majority forcefully passed the bill on Tuesday’s evening.