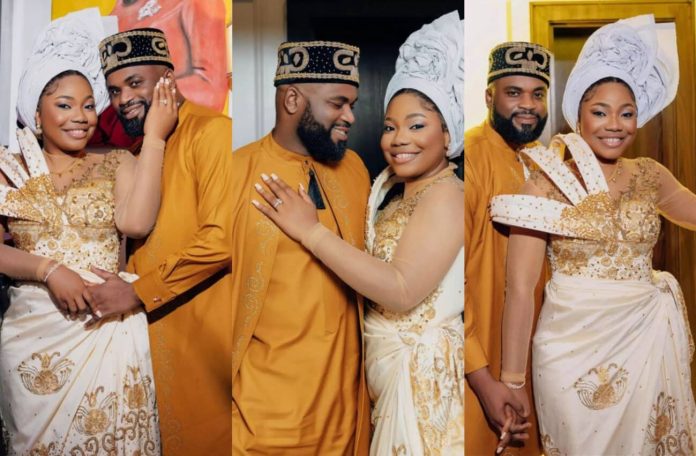 The followers of gospel singer, Mercy Chinwo, are beaming with smiles as their songstress announced her readiness to get married to her long-standing fiance at the Water Brooks Church in Nigeria.

Mercy Chinwo disclosed that she is going to tie the knot with Pastor Blessed of Water Brooks Church, who has been in a courtship with her for a while now, and finally, both have indicated joyously, to living harmoniously as the two loving birds till death does separate them when they tie the knot in the coming days colorfully to the amazement of their fans in Nigeria and other parts of the world.

Pastor Blessed of Water Brooks Church, taking Mercy Chinwo to the aisle, is not surprising to many as they learned of their secret relationship long ago which has led to their ultimate happiness at the cross-section before agreeing with each other on the purposes of marrying as their biggest announcement pointed it out that, according to the two loving companions, they feel and appreciate the love of each other in their bone marrows for the joy and glory of God as they fasted and prayed tirelessly waiting patiently, for the tantalizing day to come in their dear lives for them to tell the whole world what they are planning for to take place in their lifetime.

The fans of the gospel idol indicated their unflinching endorsement of the announcement made by Mercy Chinwo that, she is fully charged with breaking her forbidden fruit as she committed and devoted her whole life to serving and worshipping the giver of her priceless life because He is the only one she acknowledges and recognizes as Chineke and Osanubua, the Alagbada India.

Though countless of her ardent lovers stated that they were highly elated to have learned of her public disclosure about the pending wedding with the love of her life, others queried if she is still a virgin because of how deeply she is craving and yearning for the things of God. Mercy Chinwo is worldly noted and acclaimed as a Holy Spirit-filled worshipper who does not take the work of God lightly and thus, worships Him wholeheartedly and by that premise, shuns and chastises the work of darkness manifested by the filthy undertakings of the master theft and riffraff criminal champion, murderer and destroyer stated in John 10:10 who tried every means possible to break down her romantic relationship with Pastor Blessed but the Sovereign Transcendent of the Almighty Supreme God, does not forsake them in the cause of their love journey and that is the main reason why she signs for God as if she is an escaped mental imbecile who completely becomes deranged due to some mysterious spiritual afflictions unleashed on their five senses by a certain sort of an ancient deity.

Because of her deep-rooted love for God, people are gossipping about her behind the scenes asking if she has broken her virginity or yet still, remains undefiled. People should be aware that, remaining chaste for God, does not happen in an isolation but denying your entire flesh to doing the things of God whilst refuting and sidelining the irreligious activities of the world.

To remain chaste as an individual adult is a spiritual battle between your spirit and the flesh; one must dominate the other. Being religious and chaste at the same time, means, you can tame your sexual desires and every lustful thought completely but, if your flesh controls your mind, you will become immoral, sensual, irreligious, unholy, and lustful but in the case of Mercy Chinwo, nothing of that sort, portrays her personality, attributing any to her moral lifestyle.