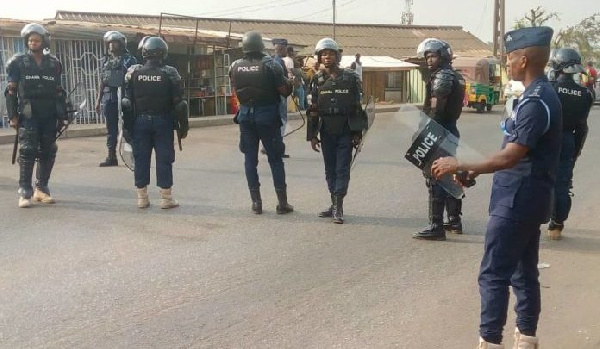 The police administration in the Nkoranza district has denied any wrong doing in the murder charges slapped them with by the town dwellers.

In a statement, the officers clarified that, they were not the ones who killed Albert Donkor but rather, he died of natural causes.

The police officers further reiterated that, the earlier report circulated on social media by some faceless people portraying that Albert was tortured in the police cell leading to his untimely death, was misleading and should be disregarded.

They have however, used the opportunity to calm down the nerves of all and sundry that, they should remain calm and allow the prevailing moment to prevail for the good of everybody to go about his or her normal duties. It is said that, the police administration in the district was completely lost touch with those they were sent to protect in the community and that is the main reason why the area folks are at loggerheads with them after they were allegedly accused of murdering Albert Donkor, a youth activist.

Many are jumping into conclusion that, the police officers in the town are sensing danger ahead which culminated in their decision to urge calm in the area. According to some informations, the police administration in the district has gathered some credible details that, some anonymous people are on the verge of seeking a reprisal attack on the administration bloc of the station, hence their swift release of the statement.