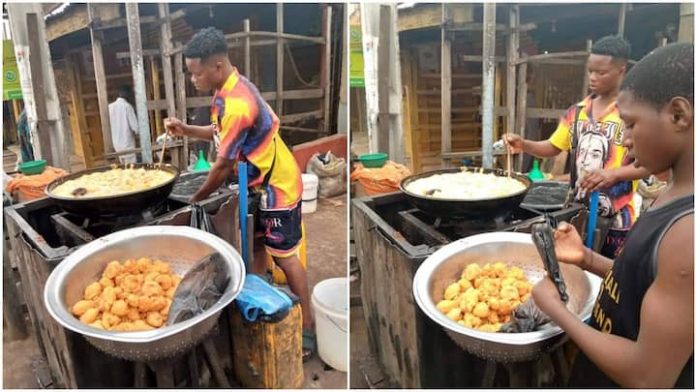 The people of Offa, a popular community in Nigeria, have been taken by the storm as three youthful exuberant, collaboratively, opened a business center where they are going to venture into frying of hot Akara for the citizens to have a feel of despite the earliest erroneous impressions some others had about them when they initiated the venture in the community with a large number of residents patronizing their business as it shows great signs of it booming and flourishing for profits and gains.

The people of Offa, a very well-known area in Nigeria, were startled as they saw earlier, the three young boys activated their activities in the community hoping their actions would have a toll on the lives of individuals residing in that part of the country because of the nefarious conducts of certain riffraff miscreants whose aim in life is just to enjoy their lives without any sacrifice or sweat dripping down from their faces because they are thinking that is the easiest way on earth to make ends meet but rather, the three enterprising guys have taken a different step altogether by letting the country know that, there is no way they are going to sit down idle and wait lackadaisical for anyone to provide them with jobs as some lukewarm graduates have been doing always after their graduation.

Residents in that famous part of Nigeria, initially thought, such energetic cool dudes would turn the place into a state of orgies and discotheques where immorality activities were perceived would be going on and by an extension, corrupting the very moral fabric of society, luring young girls into their sensual conducts but ironically, the guys have unanimously proven to them that, they are people with high hopes and aspirations hence, never venturing into anything like what the society thinks about them and thus, they are business minded people who are highly committed to attaining higher heights in life despite their little beginning because, others started calling them  on the basis that, they wrongly thought, such guys might either be into rituals where they perhaps, would be changing destinies of people who patronise their services into something else unthinkable where money would strangely be thrown up into their secret dealings at the blind side of the people living in the community ignorantly.

These purposeful and industrious gentlemen have defied all the odds and hindrances but go ahead with what they laid their hands upon because that is what is available for them to try on and see how things will pan out because to them, they know there is nobody to turn their stories around unless they pick up a business plan template to embark on their dream adventure.

Their Joint is currently receiving a high alert and oriented patronage as friends in the environment who think and share in their dream and are fervently praying for them to see the success of their business activities springing up in other parts of the community.