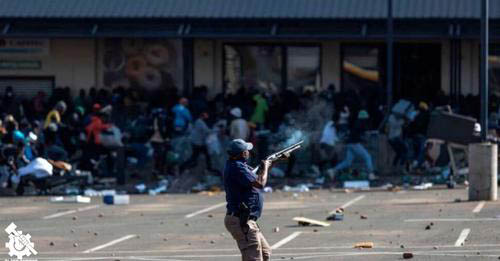 It’s been a busy month for neocolonialism as color revolutions continue to pop up, what with the chaos triggered by President Jovenel Moïse’s assasination in Haiti, the #SOSCuba protests in Cuba, and now we’re hearing news about “rioting” and “looting” in Occupied Azania (South Africa). The crusty colonizers must be having a field day with this one.

The protests began in KwaZulu-Natal on Friday July 9th, former president zuma’s home province, and gradually spread from there.

All of it started when former president jacob zuma began his 15-month jail sentence for refusing to testify to corruption, but those on the ground will tell you it’s got nothing to do with sellout zuma at all.

“It’s not about Zuma or what what. It’s about poverty, my sister, that you cannot dodge. People are hungry. There are no jobs. We cannot dodge.” An African protestor named Elijah tells Democracy Now.

Sithembile Mbete, a lecturer in political science at the University of Pretoria agrees.

“I think that the food riots, we can certainly understand in terms of the deep levels of poverty and vast inequality that South Africa finds itself in. The expanded unemployment rate of the general population is about 46%. The unemployment rate for people under the age of 24 is 74.7% at the moment. So there is very high levels of unemployment. The government had been giving a social grant to people who are unemployed during the COVID-19 lockdown period of 350 rand, which is about $24, but that was discontinued in March. And a vast number of people were reliant on that amount of money, as small as it is, to feed their families every month.”

Mbete’s breakdown is important to keep in mind because C*VID cases in Occupied Azania (South Africa) continue to rise while government assistance has stopped and with the extended lock-down in place, this has ravaged the masses, half of whom live below the poverty line.

To blame the masses for taking whatever they can after they’ve been beaten down by colonizers and neocolonial sellouts (white power in black/brown/yellow face) makes absolutely no sense.

Instead of listening to the masses and trying to figure out why they’re protesting, the current government has instead unleashed the full force of the police who arrested 3,000 protestors.

Not content with just sending in the pigs however, the state has also sent 25,000 military pigs to “calm” the violence. 212 people were reported to have been killed, but as with all things in chaotic situations, the real number is probably higher.

The masses of South Africa are already organizing in these difficult times to clean up their streets, proving to the world that Colonized people everywhere are capable of organizing around the problems their communities face.

Now current “president” cyril ramaphosa says the unrest was “planned” according to the AFP, and with all the color revolutions going around thanks to the dying u.$. empire, it gets pretty difficult at times to spot a real protest from one that’s been hijacked to align with the interests of colonialism.

We gotta pay attention to how the imperial mouthpiece, AKA the lamestream media reports on these protests as they are happening.

If they’re reporting favorably on a particular protest in a Colonized country, such as Cuba with #SOSCuba, then you can almost guarantee the “movement” is a color revolution intended to force a neocolonial sellout into power.

However, if colonial media speaks negatively of certain protests, such as the ones currently in Occupied Azania (South Africa)—e.g. saying how violent it is and focusing on the “rioting and looting”—then it’s a pretty safe bet that the movement is genuine.

Black Hammer stands together in unity with our Colonized siblings in Occupied Azania as they take back their land, lives, labor and resources from the parasites of white power and sellouts in blackface.

With Black Hammer chapters all over the continent of Africa serving their communities, passing out PPE (protective personal equipment) like KN95 masks, there’s no stopping the people taking back their lives, resources, labor and lands. We’ve even created a scholarship fund for our Kenyan chapter!

As colonialism and its empire continue to crumble, we’ll be seeing more desperate attempts to create chaos in Colonized nations from bleach demons in the so-called “west” (colonizer nations) who are losing their control over the world, but it ain’t gonna work this time.

Colonized people all over the world are fed up and fighting back, and so are we! It’s time to organize our communities worldwide to build for ourselves and not for white power or its sellouts like zuma.